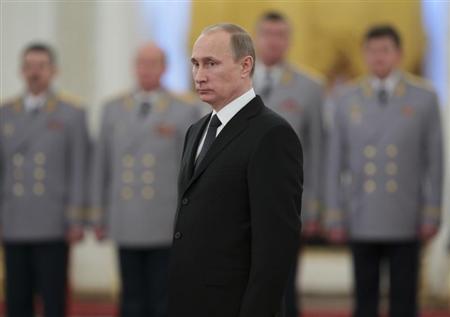 For the first time since coming to power, President Vladimir Putin met with his non-parliamentary opposition to discuss topics for his yearly state-of-the-nation speech next month – including the motion to announce a broad amnesty of ‘political prisoners’.  Putin promised to study Vladimir Ryzhkov’s list of 70 such prisoners, cautioning, ‘[W]e cannot create a nervous atmosphere in society that tomorrow some criminals will be freed.’  Putin has called for an easing of the ‘torrid of hatred’ directed against Russia’s LGBT community (‘people of non-traditional sexual orientation’).  Seven more Greenpeace activists were released on bail yesterday, bringing the total number of detainees down from 30 to eleven.  (The Guardian says 20 have been granted bail thus far.)  The Bolotnaya Square protesters’ detentions have been extended for a further three months by a Moscow judge.  The FSB is using critics of the Sochi Olympics as ‘practice targets’ in its preparatory anti-terrorism drills, says the Moscow Times, after outspoken environmentalist Dmitry Shevchenko was questioned for four hours at Krasnodar airpot on suspicion of belonging to a terrorist group.

Pussy Riot rocker Maria Alyokhina will file an appeal against her sentence with the Supreme Court.  ‘In many ways, a Pavlensky trial could turn into a Pussy Riot redux.’  Leonid Ragozin noted the irony behind the conviction of a Nazi flag-waving soccer fan : ‘So you get seven-day arrest for waving Nazi flag in public, but two years for singing anti-Putin song in a church.’ Mikhail Prokhorov is joining others in criticizing the Kremlin’s plan to change the rules for tax investigations – arguing that it will increase corruption.  Russian lawyers are speaking out against a Kremlin measure to merge the currently independent business and criminal law courts, concerned that the merger will dissolve the more progressive aspects of the arbitration courts.  The Kremlin has finalised its criteria for an Internet blacklist.

Here’s an analysis of state-run Rostelecom’s plan to boost profitability by merging with Tele2.  Belarus has agreed to extradite Uralkali chief Vladislav Baumgertner.  Novatek and Gazprom Neft are buying Eni’s stake in SeverEnergia for $2.94 billion.