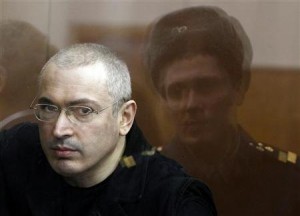 A Moscow court has ruled that Mikhail Khodorkovsky, the former head of Yukos, can walk free in 2014, reducing his sentence from 13 to 11 years. ‘May God bless him,’ said President Vladimir Putin, who denied having any role in the reduction.  ‘There has been no personal persecution [of Khodorkovsky],’ he added: ‘Everyone tries to tie it to politics.  There was no such thing. This was purely about an economic crime.’  Alexei Navalny, and his younger brother Oleg, have been charged with fraud and money laundering, and could face two years in jail (on top of the 10 he already faces under earlier charges).  The charges relate to the brothers’ employment at a postal business from 2088-11, and Navalny described them as ‘complete nonsense’.  At a 4.5-hour news conference resembling his former habit of televised call-in shows, Putin answered questions from 60 journalists yesterday.  President Barack Obama granted permanent normal trade relations to Russia, but the legislation is tied to the controversial Magnitsky List, which, Putin said, ‘poisons our relationship’.  Speaking about new moves to ban U.S. citizens from adopting Russian children, Putin stated that the measures were ‘appropriate’ and that he would probably sign it into law, although hinted that it could take a year for the measures to come into force due to the terms of the adoptions agreement he signed last summer.

Pussy Riot member Yekaterina Samutsevich talks to the Guardian about why the band won’t give ‘legal performances’ with commercial stars.  The Economist looks at Moscow Mayor Sergei Sobyanin’s plans to improve the city, calling them ‘less progessive and more business-as-usual when influential lobbies are involved’.  A group of Russian pop singers have spoken out against St. Petersburg’s new anti-gay propaganda law, calling for its author to be removed from the city legislature.  The problem of souring relations between Russia and the E.U. is an ideological one, says Der Spiegel.  Oktogo.ru has topped the Moscow Times 2012 list of Russia’s top ten Internet companies.

It’s minus 41 degrees centigrade in Siberia.