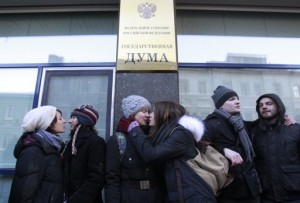 The Kremlin wants to introduce a nationwide ban on ‘homosexual propaganda’ which, if it passes, could impose fines of up to $16,000 for acts such as kissing in public.  The founder of gay rights group the Rainbow Association says it’s part of a Kremlin crackdown on all minorities, whether political, religious, or sexual. Cartoonist Yury Norshtein’s speed at an awards ceremony was ‘drowned out by applause and shouts of ‘Bravo!’’ after he said that President Vladimir Putin held shared responsibility for the death of Sergei Magnitsky.  Moscow’s City Court has upheld the decision to keep opposition activist Leonid Razvozzhayev in a Siberian pretrial jail until April 1, where he is complaining of a decline in his health and says he fears for his life.  Local elections commissions are being formed nationwide, five years ahead of the next election, in what watchdogs are calling a measure to protect the ruling party.  Rock frontman Yury Shevchuk is interviewed by RFE/RL on the politicisation of Russia’s youth.

The Kremlin is sending two planes to Lebanon to evacuate Russians from Syria.  The value of Russia’s weapons exports for 2012 is being ‘tentatively estimated’ at over $15 billion.  Vladimir Putin has issued a decree calling on the FSB to create a system to protect government websites from cyberattacks.  The head of the Federal Migration Service says that migration is Russia’s only hope for increasing its labour force in the next two decades.  United Russia lawmakers want world chess champion Anatoly Karpov to be investigated and possibly labeled as a foreign agent for apparently lobbying on behalf of a tobacco company.  Retailer Magnit reported a 92% increase in net profits for 2012.

A photograph of Lenin’s body lying in state on this day in 1924.  A collection of photographs taking during the Russian revolution in 1917 has been uncovered in a basement in California.

PHOTO: Gay rights activists kiss during a protest outside the Duma, Russia’s lower house of Parliament, in Moscow January 22, 2013. Russia’s parliament is due to hold its first reading on a “homosexual propaganda” law on Tuesday. REUTERS/Sergei Karpukhin