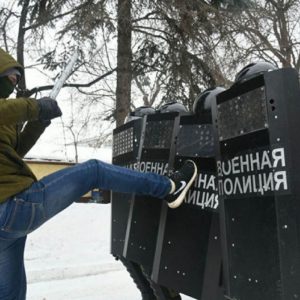 The US Embassy in Moscow is demanding that Russia give US diplomats immediate access to American investment-fund manager Michael Calvey, who has been formally charged with financial fraud. Foreign Minister Sergei Lavrov has commented on the case, noting the support that Calvey has had from many in the Russian business community, asserting, “I think that all the circumstances of the case will be taken into account when the court session is held”. Bloomberg considers how tightly Vladimir Putin holds Russia’s purse strings, one advantage of having a hefty rainy day fund being that it gives him money “to fight the West”. Although Ukraine was conspicuously absent from Putin’s state of the union address, tensions between Moscow and Kiev have not stopped grabbing headlines: Ukraine’s State Security Service has accused Russia of interfering in the electoral process and a terse verbal exchange is taking place on the cultural battlefield with regards to screenings of a new Russian war movie called T-34.

The annual Red Square military parades are a spectacle of weaponry strength, but sanctions are making it increasingly difficult for the navy to produce what it shows, says Reuters. The Moscow Times reports on St. Petersburg’s Flood Prevention Facility Complex, the city’s first line of defense against inundations, which are increasingly more likely with climate change. Memorial has described Vyacheslav Yegorov, the leader of anti-landfill protests in the city of Kolomna, as a political prisoner. In Yekaterinburg, a military course has apparently been established to teach schoolchildren how to help disperse street protests.

Soviet forces pulled out of Afghanistan in 1986, but this article examines how the war lingers in the memories of its veterans – and how it impacts upon foreign policy decisions today.