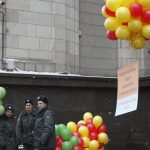 Having initially vetoed two condemnations of the Syrian regime, Russia and China have agreed to back the latest U.N. Security Council resolution and support Kofi Annan’s calls to end the conflict in Syria, which threatens ‘further steps’ if the peace plan is not complied with.  Reuters says Russia’s decision to back the U.N. resolution is ‘one part public relations, one part cold calculation’.  One analyst suggests that it will be ‘extremely difficult for Putin and the Russian elite’ to take this decision: ‘[t]he relationship between Syria and Russia is the last remnant of Soviet politics in the Middle East.’  Joining the many other opposition figures forming political movements, former president Mikhail Gorbachev has announced plans to ‘participate very actively’ in the recreation of his Social-Democratic Party once rules for creating parties are relaxed in May.  Sergei Radchenko recalls Gorbachev’s dismissal of the Tiananmen massacre in China in 1989, and calls him ‘the prophet’ of BRIC.  Boris Kagarlitsky suggests that opposition protests to be held in Moldova in May could ‘become the beginning of a revolutionary uprising’.  The sports minister says Russia will step up its efforts to stamp out racism among fans ahead of the 2018 World Cup, after a banana was thrown at a Congolese defender.

Protesters in Kazan are demanding a meeting with a top Moscow investigator to discuss allegations of police torture.  A VTsIOM poll on the dwindling intensity of the election protest movement suggests that ‘Russians are turning increasingly apathetic’; a separate poll by the same organisation suggests that the majority of Russians deem Putin’s election promises trustworthy.  Online protesters are fearing a crackdown due to the ‘dangerous precedent’ under which blogger Arkady Babchenko could face prison time for a LiveJournal entry.  The U.S. denies earlier reports that it had provided Russia with classified information to ease concerns over missile defence.  The decision to allow NATO to set up a hub for Afghan transit operations in Ulyanovsk has triggered protests by those concerned about national security.

A state of emergency has been declared in Udmurtia after a ‘localised’ chemical spill of 160 tonnes of carbon tetrachloride at a disused factory last year.  Authorities are finally taking action after residents accused the regional government of putting 40,000 people at risk.  Russia has destroyed over 60% of its chemical weapons stockpile, with a goal of 100% by 2015.  The space industry is struggling to stay modern as the number of recruits drops and the prestige previously granted to cosmonauts disappears.  Putin critic Marina Salye has died of a heart attack, aged 77.  Deputy Prime Minister (and ‘staunch nationalist’) Dmitry Rogozin has been named as the presidential envoy for the Transdniester conflict.

A court in Tomsk rules that the Bhagavad Gita itself does not contain extremist material: the dispute over the ban of the book related to a Russian edition containing a prologue by Swami Prabhupada, the founder of the Hare Krishna movement.  Russia’s Eurovision representatives, Buranovskiye Babushki, in pictures.