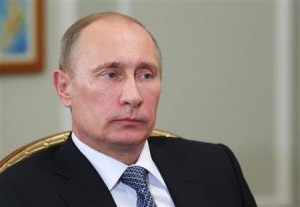 Prosecutors are conducting wide-ranging checks on hundreds of nongovernmental organisations, with one rights worker alleging that up to 2,000 searches have been made since last month (a case in point: the group Memorial was searched yesterday).  Human Rights Watch says the scale of the inspections is ‘unprecedented and only serves to reinforce the menacing atmosphere for civil society’.  A man who claims to be a former government operative says that police officials organised clashes at last year’s opposition rally, and members of the Kremlin’s human rights council have voiced tentative support for his claims.  New charges have been brought against activist Leonid Razvozzhayev.  Prime Minister Dmitry Medvedev says that a solution to the Cyprus crisis must be sought, but his meeting with the European Commission was ‘strained’ amid accusations that he was ‘play[ing] with his iPad’ during proceedings.  Ten opposition activists were detained yesterday for briefly blocking an entrance to the Central Bank, to draw attention to their demand that Russian money stored in tax havens be repatriated.

Rosneft is now officially the world’s largest oil producer after taking over TNK-BP in a $55 billion deal, which was sealed at President Vladimir Putin’s home yesterday.  The company is planning to increase its exports to China to 50 millon tons by 2018, with speculation that such a deal would be signed this week during Chinese President Xi Jinping’s visit to Moscow.  Dmitry Peskov, Putin’s spokesman, says that the visit will not lead to any new gas deals as no agreement has yet been reached on gas dynamics between the two countries.  The BBC reports on the current relationship between China and Russia, and reviews the Chinese media’s take on Xi’s visit, including one analyst’s view that it is an attempt to ‘restart’ relations.  Bloomberg says China is anticipating that the trip will lead to an energy breakthrough. ‘Energy cooperation is the crown jewel of China and Russia cooperation.’ Are Gazprom’s good times coming to an end?

Putin has called on the BRIC economies to take a greater geopolitical role.  Reuters reports on Putin’s move to elect Elvira Nabiullina as the new head of the Central Bank.  Auditors have launched a probe into the Bolshoi Theatre to address allegations of corruption and mismanagement.