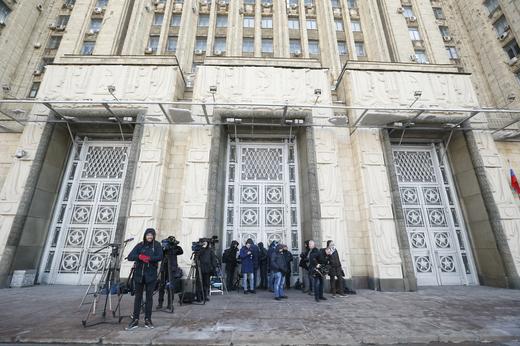 US President Donald Trump and his French counterpart Emmanuel Macron agreed on “the need to take action to hold Russia accountable” for the nerve agent attack on former spy Sergei Skripal in Salisbury, UK earlier this month. German Chancellor Angela Merkel also joined in with calls for the Kremlin to respond, saying, “we can’t ignore evidence just because we don’t want to call out Russia”. Former London Mayor Ken Livingstone disagrees, saying “all through our lives we have been lied to about Russia”, but the UK is planning to ask European leaders to expel Russian intelligence agents and dismantle the Kremlin’s networks, and the Kremlin described the UK Foreign Secretary as “poisoned with hatred and anger” after he compared Putin to Hitler. RFE/RL has compiled a timeline of the Kremlin’s widely varied denials of involvement in the Skripal attack. Despite the row, notes Bloomberg, “most emerging-market investors [in the UK] will end up holding a chunk of their portfolios in Russia”. The Polish Foreign Minister accused Russia of destabilising Eastern Europe and trying to change the political order in Europe.

Putin’s previous winning of the presidency, in 2012, brought six months of protests. This piece suggests that many of those who protested last time have since left Russia. A radio host in Kamchatka lost her job after comparing pro-Putin voters to primates. Continuing reports of electoral violations now include reports of people voting multiple times at different polling stations. “That’s not me,” said one woman. The State Duma’s ethics commission has cleared senior deputy Leonid Slutsky of wrongdoing over sexual harassment allegations against him, and concluded that the allegations were “selective, targeted, and planned”. The Central Bank will have to intervene on behalf of OFC Bank, owned by a former classmate of Vladimir Putin, introducing a temporary administration for a period of six months “to protect the interests of creditors”. The head of CEFC China Energy was detained last month in the middle of his attempt to buy a 14% ($9.1bn) stake in Rosneft, leaving a potentially huge political and financial deal up in the air.

Despite currently troubled relations, Russia’s Gazprom will need to use Ukraine’s gas infrastructure well beyond the end date of their existing agreement for its gas flows to Europe, according to the CEO of Naftogaz. Lukoil saw a more than doubled fourth quarter profit thanks to higher oil prices and sales. Schoolchildren located near the Yadrovo landfill outside Moscow have reportedly been hospitalised after exposure to dangerous gases leaking from the site. An angry crowd gathered and threw snowballs at the regional governor in protest following the incident. Russia’s official position on taking organs from the deceased is that it is “inhumane” to ask for relatives’ permission, so it doesn’t.