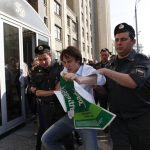 President Vladimir Putin announced his new Cabinet yesterday, replacing three-quarters of the previous ministers, offering ‘no concessions to opposition demonstrators,’ giving ‘purged ministers’ new positions, and putting his long-term ally Igor Shuvalov as his second-in-command.  Igor Sechin, who was Putin’s energy ‘tsar’ in the previous government, has not been given a position, but will retain his energy role outside of the government.  RFE/RL has compiled a Who’s Who of key new ministers.  The new education minister has already suggested that Russia cut the number of university students receiving money from the state budget.  Prime Minister Dmitry Medvedev has submitted a request to join the United Russia party.

Three people were detained yesterday, including Sergei Mitrokhin, the head of the Yabloko party, for an unsanctioned picket near the State Duma.  Vasily Yakemenko, the founder of pro-Kremlin youth group Nashi, is planning to create a political party to target young creative types who were drawn to the opposition protests over the last year and who ‘have their own opinions’.  Current opposition camps are continuing to change locations, as they are broken up by police ‘almost nightly’.  RFE/RL has video of the May 19 march.  Russia has expressed concern over recent arrests of Occupy demonstrators in Chicago and Montreal, citing ‘disproportionate force’.  Foreign Ministry spokesman Alexander Lukashevich says that it is unacceptable for other countries to interfere in its posthumous trial of Sergei Magnitsky, saying that this borders on interference in internal affairs.

Putin’s excuse for foregoing the G8 summit was ‘ridiculous’, says Alexander Golts, a clear attempt to ‘belittle’ Western leaders.  Homeowners and tenants at the Angelovo gated community in Moscow are banding together to face the management over high and mysterious maintenance fees.  79 people were arrested in Moscow yesterday following a ‘mass fight’ between Kyrgyz and Uzbek groups.

PHOTO: Russian police detain an activist from the “Yabloko” political party during a protest outside the Duma, Russia’s lower house of Parliament, in Moscow May 22, 2012. Activists protested against a proposed new law to fine participants at rallies where violations occur, local media reported. REUTERS/Maxim Shemetov