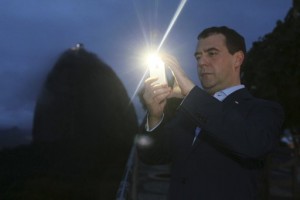 Preisdent Vladimir Putin used the St. Petersburg Economic Forum as a platform to warn political oppositionists against creating unrest, urging would-be dissenters to operate ‘exclusively with the confines of the law‘.  High profile activist Maria Baronova, a former Duma Deputy assistant, has been charged with inciting violence during a Moscow rally on May 6, part of a crackdown on opposition leaders which saw investigators invading homes and seizing property.  St. Petersburg officials may pass a new bill that would outlaw public events in the city center and raise fines for participants, part of a bill to crack down on protest rallies.  A report by the Independent Judicial Expertise Council, released by the President’s human rights council, concludes that the actions of Pussy Riot, whose members have just been given extended jail time, are ‘reproachable, but they do not constitute criminally prosecutable hooliganism.’  An Interior Ministry official has been arrested after accepting a suitcase of cash as a bribe from a company wishing to secure contracts with the Ministry.

Sergei Lavrov admitted that the Russian cargo ship that was forced to abandon its route to Syria was carrying repaired combat helicopters, together with ‘air defense systems, which can be used only for repelling foreign aggression and not against peaceful demonstrators.’  An Arab League official called for Russia to halt its arms sales to Syria.  Russia and the U.S. are coming closer to an ‘enviable’ visa agreement.