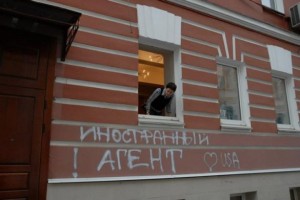 At least four non-governmental organisations were harassed with graffiti and pickets after the new law, under which foreign-funded NGOs must register as ‘foreign agents’, came into force yesterday.  Rights group Memorial found its building spraypainted with ‘Foreign Agent’ graffiti.  Lev Ponomaryov, the head of For Human Rights, continues to insist that his organisation will ignore the law, which could provoke a fine.  Opposition activist Leonid Razvozzhayev has been charged with stealing 500 fur hats – 15 years ago; the charge (which Razvozzhayev denies) was made two weeks before the 15 year deadline after which such cases expire.  ‘The authorities are determined to lock up their political opponents and are trying to do so in anyway they can.’  President Vladimir Putin is pessimistic about the outcomes of the initial period of Russia’s new World Trade Organisation membership, warning economists to expect higher unemployment and budget revenue shortfalls.  RUSTEC, a large new wind farm plan being developed by the International Finance Organization, ‘could kick-start the country’s renewable energy industry’.

Defense Minister Sergei Shoigu met the outgoing Chinese president yesterday to discuss bilateral cooperation and potential weapons sales, with analysts touting the ‘special significance’ of the visit due to China’s leadership reshuffle.  Power producers TGK-9 and TGK-7 signed contracts worth $31 billion to buy natural gas from a subsidiary of TNK-BP.  Vladimir Putin has authorised the $1.6 billion recapitalisation of state-run hydroelectric company Rushydro.  Thanks to the emergence of spot pricing, OMV’s long-term relationship with Gazprom is becoming ‘uneconomic’; the CFO of OMV commented: ‘Those who are committed to purchase gas from Russia with the oil price as part of the formula of calculating the price are clearly carrying the burden.’  The Kremlin has not abandoned its plan to privatise half of Rosneft by 2018.

Former Yukos CEO Mikhail Khodorkovsky has criticised BP head Bob Dudley for taking a ‘flexible’ view of Russian corruption, and accused Rosneft of using ‘pseudo-legal force’ as a bargaining method.  Video-sharing website YouTube has been removed from watchdog Roscomnadzor’s Internet blacklist after a supposedly ‘unfortunate technical mistake’ caused it to appear there; the site reportedly removed several of its videos earlier this week in response to official requests.

PHOTO: A Memorial worker examining the “foreign agent” graffiti Wednesday. The NGO called it an insult to gulag victims. (Memorial)