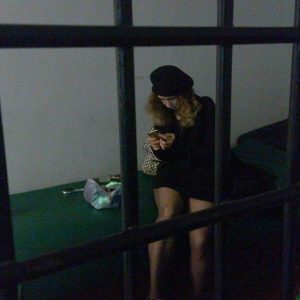 A draft order released by the Justice Ministry has indicated that the government may try to define all media outlets which receive foreign funding “foreign agents” (as opposed to the seven outlets it had identified at the start of this month). The story of the German-funded Friedrich-Ebert Foundation’s experiences in Russia offers some insight into the pressures foreign NGOs are currently facing. Anti-corruption activist Alexei Navalny has taken aim at President Vladimir Putin’s spokesman Dmitry Peskov once more with allegations that the latter’s wife has purchased a $2 million luxury apartment in Paris. Maria Alekhina of Pussy Riot will have to do 40 hours of community service for her anti-FSB protest earlier this week. In the manner of his previous election campaign, Vladimir Putin has introduced a draft proposal that would offer debt relief to a third of the Russian population before the elections in March. The OSCE Office for Democratic Institutions and Human Rights will deploy 80 long-term and 420 short-term observers to Russia for the elections next year.

The European Union has formally prolonged economic sanctions against Russia for six months over the conflict in Ukraine. UK Foreign Minister Boris Johnson is in Moscow today in the first official visit by a British foreign secretary to Russia in five years; the Kremlin has described current bilateral relations as at “zero-level”, something not helped by the fact that British Prime Minister took her trip to Poland this week as an opportunity to castigate Russia for weaponising information. Johnson is expected to offer a similar warning to the Kremlin about Britain’s low view of cyberwarfare, as well as its willingness to retaliate. An interpreter for Ukraine’s prime minister who was photographed with Theresa May inside Downing Street has reportedly been arrested on suspicion of working as a Russian agent. The suspect, Stanislav Yezhov, had been present at a number of high-profile meetings. The Russian Foreign Ministry has cited Ukrainian aggression as the reason for its decision to leave a joint ceasefire control group. The State Duma has approved an agreement with Syria to extend Russia’s lease on a naval base at Tartus for 49 years, and Moscow has asserted that there is no reason for US ground forces to remain in the conflict-torn state. Following the meeting between President Putin and his Serbian counterpart Aleksandar Vucic, Serbia hopes to place an order for military helicopters.

The New York Times reports on the business of extradition tit-for-tats, another strategically deployed weapon in Russia’s armoury. Coal pollution blights the far eastern Russian port of Nakhodka on the Sea of Japan and despite promises from the government, residents are starting to lose hope for improvement. Are the authorities hoping to cover up the vagaries of state nuclear firm Rosatom? Alfa Bank co-founder Mikhail Fridman has been named businessman of the year by Forbes Russia after investing over $5 billion in foreign companies, a record for Russian businessmen in 2017.