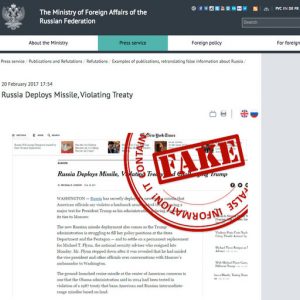 The Foreign Ministry has revealed a new section on its official website which underscores, and decries, what it calls ‘examples of publications spreading false information about Russia’.  Each entry is completed with a red stamp reading ‘fake’ and so far NBC, the Telegraph and the New York Times are among those to have received the seal of disapproval.  Defence Minister Sergei Shoigu is on message too with a pledge to establish a new military force to conduct ‘information operations’ against Russia’s enemies.  The thing is, says Brian Whitmore, propaganda never really went away.  Vladimir Putin has introduced a new measure which will fine Internet providers who refuse to limit access to online information banned by the authorities.  Energy companies have apparently been asked by the Kremlin to provide information about positive developments that could impact upon public opinion in the period up to next year’s elections.

Russia is reflecting happily on its military performance in Syria, this report indicates, as does the fact that Putin has promoted some generals to higher military ranks for their role there.  Inspiring young cadets with love of the Motherland should be made easier, the military believes, by plans to build a replica of the German Reichstag at a military-theme park outside Moscow.  Foreign Minister Sergei Lavrov has said Russia is open to dialogue with the United States on creating safe zones in Syria.   ‘They go in, they mess it all up, they break everything and want everyone to pay for it’: the words of one European diplomat on the Kremlin’s attempts to solicit world powers to provide Syria with reconstruction funds.  The head of the OSCE has said that the ceasefire in Ukraine is being routinely violated.

The Presidium of Russia’s Supreme Court has closed the case against political activist Ildar Dadin, who had been charged with participating in multiple unsanctioned protests, and ordered his release from custody.  Could Russia say goodbye to its much-vaunted simple 13% flat income tax rate?  It seems Russia is less than pleased at the appointment of ‘100% hawk’ H.R. McMaster to position of U.S. national security advisor.

PHOTO: A screenshot from the Russian Foreign Ministry’s website. (The New York Times)