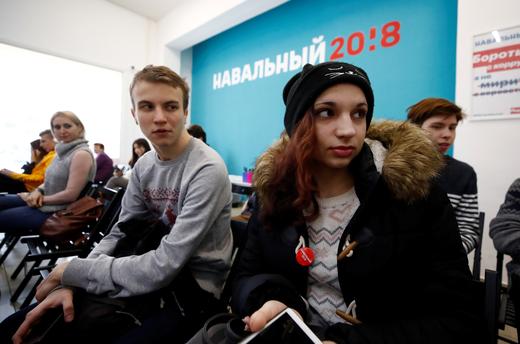 Opposition leader Alexei Navalny was detained yesterday, in the latest of an ongoing string of arrests, as he left a dentist appointment. His campaign chief, Leonid Volkov, was also detained on his way to organise election monitoring in Bashkortostan. Navalny was promptly released, and said he does not understand why it took 7 people to detain him. TASS reported that he was taken to the police station to sign a notification of administrative charges. He expects that he will be jailed until the presidential election on March 18 has passed, as he has been calling for a boycott at a time when the Kremlin are pushing for the highest possible turnouts. A state-backed poll by the Russian Public Opinion Research Centre found 81% of those surveyed were planning to vote, although as the Moscow Times points out, “Electing Putin in Putin’s Russia is about as difficult as shooting a large fish in a very small barrel.” A man who took part in an anti-corruption rally in Moscow last year has been sentenced to 9 months in jail. Amnesty International named Russia as one of the countries in which human rights are most violated, citing “spectres of hatred and fear [that] loom large in world affairs”. Moscow Mayor Sergei Sobyanin announced that opposition politician Boris Nemtsov, who was murdered in 2015, will finally officially be memorialised in the form of a plaque on his apartment building; Moscow city had previously prevented activists from installing a similar plaque at the site of his death.

Russia blocked a UN resolution on a ceasefire in Syria’s Ghouta, and dismissed reports of heavy casualties as “mass psychosis in global media outlets”. RFE/RL interviewed a Cossack about the attacks on Russian mercenaries in Syria last week which are thought to have caused 300 deaths. Marking the Fatherland Defender’s Day, a major national holiday in Russia, Vladimir Putin praised Russia’s patriotism as part of “the national character of our people.” The Nation writes on Russia’s emerging role as a balancing influence in the Middle East. Olympic curler Alexander Krushelnitsky has returned the bronze medal he won last week after testing positive for meldonium; he denies doping. Russia paid a $15 million fine to the International Olympic Committee for the doping charges made against it last year, which may lead to a reversal of its suspension, and it may also be permitted to fly its flag at the closing of the Games in Pyeongchang this Sunday.

Otkritie Bank, which received an $8 billion rescue package from the Central Bank last year, is requesting more capital. A Levada Centre poll has found that attitudes towards Soviet-era secret police are softening.