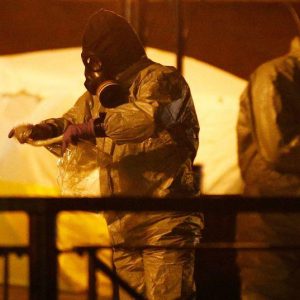 The European Union has recalled its ambassador from Moscow in a show of support for British Prime Minister Theresa May’s stance on the Salisbury poisoning attack on Sergei Skripal and his daughter. Donald Tusk, the president of the European Council, tweeted that the Council agreed with the UK government that it is “highly likely Russia is responsible for #SalisburyAttack and that there is no other plausible explanation”. BBC political editor Laura Kuenssberg notes the Council’s reaction offers a “small, but significantly different, tone to the statement a few days ago”, one more in line with the British response. The Czech Republic is one of the EU states apparently now mulling expelling a number of Russian diplomats in solidarity with Britain. Nor has German Chancellor Angela Merkel ruled out the idea of further punitive measures. Itar-Tass is quick to point out that the European Council has in fact adopted no practical measures against Moscow over the case – and this article explains why Germany has a considerable amount to lose in terms of trade if it alienates Russia completely. There is evidence, also provided by Itar-Tass, that not everyone within the European community believes that further sanctions would be appropriate.

The British Council in Moscow has been instructed to cease its activity over the spat, a move lamented by the council’s former director in St. Petersburg in an op-ed here. Foreign Minister Sergei Lavrov believes that “London is making every effort to push the relations with Russia into a deadlock”.  In what the Independent describes as an “extraordinary” press conference in which it was alleged Britain has stores of the Novichok nerve agent, the Russian ambassador to London, Alexander Yakovenko, has suggested the case is so complex it would require the investigative nous “of a person like Poirot”.  One of the nerve agent’s creators apparently claims to sold the poison to Chechen gangsters in the 1990s. The subject of organised crime is the focus of Mark Galeotti’s Long Read for the Guardian, which finds one of its key characteristics to be ‘the depth of its interconnectedness with the legitimate economy’.

Although it has cancelled the results of 14 polling stations amid accusations of fraud, Russia’s senior election official has argued that violations recorded on Election Day did not effect the result of the vote. Reuters has spoken to seven of 17 people who were photographed casting multiple votes on election day; all of whom denied the accusation or chose not to comment. Spending promises were a key part of the election campaign, but now remains the painful question of how to make them a reality.