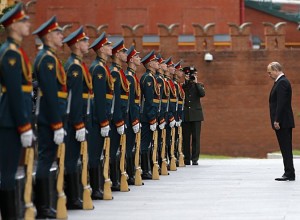 Both Ukrainian and Russian sources reported renewed fighting in eastern Ukraine yesterday, despite a unilateral ceasefire having been declared by Petro Porosheko on Friday, and publicly backed by Vladimir Putin: ‘It is important that this ceasefire lead to dialogue between all opposing sides in order to find compromises acceptable for all’.  At yesterday’s ceremony marking the World War II anniversary of the Nazi invasion of the Soviet Union, Putin said that Russia was fully in support of the ceasefire.  But the Kremlin’s conflicting moves ‘still leave unclear Moscow’s level of commitment to de-escalating the conflict,’ says The Guardian.  Whatever Putin’s aims in Ukraine, the crisis has ‘reset Russia’s national conversation,’ says Vladimir Frolov.  The Estonian Prime Minister wants NATO to establish a permanent presence in his country to protect against Russian incursions, urging his allies to ‘open your eyes and stay awake’.  Kremlin critic Alexei Navalny is facing new criminal charges after a Friday raid on his apartment in connection with a fraud case supposedly unearthed a stolen drawing.

Russia has approached the World Trade Organisation with its complaints against U.S. sanctions, saying Washington has failed to fulfill its trade obligations, and thereby is in violation of WTO rules.  The U.S. is threatening further sanctions on various Russian industries in retaliation for what it sees as increased support to Ukrainian separatists.  Russia is seeing natural population growth for the first time since 1991, but doubts exist as to whether the Kremlin can keep it up.

PHOTO: President Vladimir V. Putin of Russia on Sunday attended a commemoration of the 73rd anniversary of Nazi Germany’s invasion of the Soviet Union in Moscow. (Maxim Shipenkov/European Pressphoto Agency)