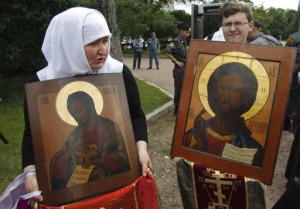 The detention of political protest and punk group Pussy Riot has been extended for another six months to 2013, prompting a global outcry, with a member of the German parliament calling them Vladimir Putin’s ‘personal prisoners’, and their lawyer calling the ruling illegal. ‘It’s not a matter of law. It’s not a matter of reason. It’s a way of saying, ‘We can do what we want.‘  Lyudmila Alexeyeva gave a speech on her birthday criticising Vladimir Putin’s policies, saying ‘repressions don’t solve problems […] only aggravate them.’  Putin signed into law both Russia’s accession to the World Trade Organisation and the measures to brand internationally-funded NGOs as ‘foreign agents’.  The organisations Memorial and For Human Rights have said they will ignore the law.

Three Krasnodar officials have been detained and could face seven years in prison over negligence charges resulting from the Krymsk flood.  ‘There have been more natural and man-made catastrophes in Russia under President Vladimir Putin than at any time since the Chernobyl nuclear accident in 1987.’  The woman who set herself on fire at United Russia’s Novosibirsk office after an unsatisfactory meeting with party staff has died of her injuries.

Italy’s ENI has signed an exploration loan facility agreement with Rosneft, and Rizzani de Eccher will invest $1.2 billion in ski, beach and spa resorts owned by Northern Caucasus.  Is this part of the foreign investment sought by Putin to ‘insulate Russia from global [economic] tremors’?