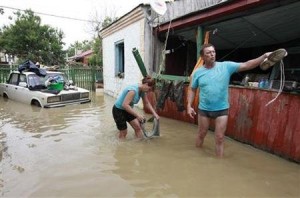 A group of Duma lawmakers wants to strip the Central Bank of its powers to set interest rates, and transfer this and other policymaking powers to the government instead, sparking ‘disbelief’ from experts who are certain that the motion will never pass. ‘It’s the surest way to feed capital outflow.’  Andrei Klepach estimates that capital outflows this year could amount to over $50 billion.  President Vladimir Putin has dismissed several high-ranking officials at the Interior Ministry.  New floods in the Krasnodar region have killed four people.  Spanish police in Granada have arrested Pyotr Silayev, one of the suspected masterminds of a July 2010 mob attack on Khimki’s City Hall.  This piece argues that World Trade Organisation membership will benefit consumers in the form of lower cost imports, but that Russia’s struggling industries could suffer from foreign competition.  ‘No farmer in Tatarstan can meet WTO standards,’ says one vegetable merchant.

This article looks at parallels between Pussy Riot/Voina and the National Bolshevik Party who faced persecution in the early 2000s.  Pyotr Verzilov, the husband of Nadezhda Tolokonnikova, draws attention to the case of Taisya Osipova, an opposition member’s wife who says her ten-year jail sentence was the result of being ‘framed’.  A court agreed this week to look at new evidence in her case.  The Other Russia claims that this series of time-stamped photographs proves Garry Kasparov is innocent of the charges of biting a policeman.

ConocoPhilips has only one small operation remaining in Russia after selling its stake in the NaryanarNefteGaz joint venture.  Mobile TeleSystems has had its Uzbek license removed, and now faces ‘significant’ losses in the country.

PHOTO: Local residents stand in a flooded courtyard of a house in the town of Krymsk, which has been seriously damaged by floods, in the Krasnodar region, southern Russia, July 8, 2012. REUTERS/Eduard Korniyenko