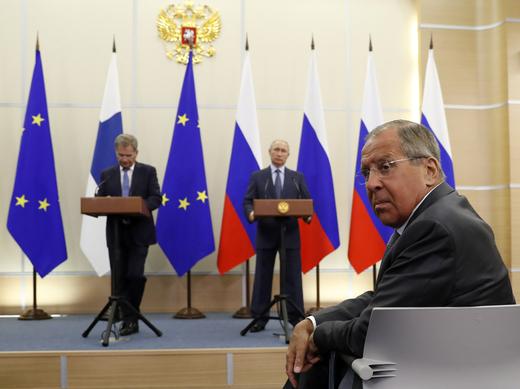 Speaking during a trip to Finland, President Vladimir Putin said that Russia had no choice but to respond to NATO’s expanded infrastructure and missile defence systems near its borders. He also said that he hopes the US establishment will realise that its “counterproductive and senseless” sanctions policy “has no prospects”; nonetheless he thought his summit with Donald Trump last month was “useful”. Trump’s actions in destabilising diplomatic ties internationally is contributing to a warmer European reception for Putin than he has seen in some years, argues Bloomberg, but some EU governments have been calling for better Russia relations for some time. A US research analyst told Bloomberg that the most recent US sanctions against Russia are “absolutely negligible” and will have little to no effect, but that the measures currently being considered by the US Senate are much stronger. Russia is bracing for these, and the likely damage to the ruble and heightened capital outflow that would ensue. With the ruble at a two-year low, the Economy Ministry is likely to reduce its 2018 growth forecast again. This piece on the 1998 financial crisis, when “the whole Russian economy fell to pieces at a stroke,” seems aptly timed.

The Taliban has agreed to send senior members to Russia for peace talks on Afghanistan, but both Afghanistan and the US have declined the invitation; the former said it would rather hold its own direct talks. There is speculation that the refusals may lead Russia to call off its gathering, to which it has invited 10 other countries. A Foreign Ministry report on the nerve agent Novichok pointed out that some 20 countries were given the means to obtain the nerve agent back in the mid-1990s, and that it would be near impossible to identify the country that the agent used in the Salisbury attack on Sergei Skripal would have come from. Leonid Bershidsky looks at the ways in which the Soviet Union has been revamped and incorporated into contemporary Kremlin ideology. It has now been a full year since Gogol Center director Kirill Serebrennikov was detained on fraud charges; his supporters say the charges, connected to government funds allocated to him for a theatre project, are politically motivated.

Foreign banks including Citigroup and Goldman Sachs are protesting a Russian Central Bank plan that would limit them from being able to move their capital from local branches to units outside of Russia, which is currently not restricted. Credit Suisse, “one of the most important destinations for money leaving Russia”, has frozen $5 billion of Russia-linked money in order to avoid going against US sanctions.