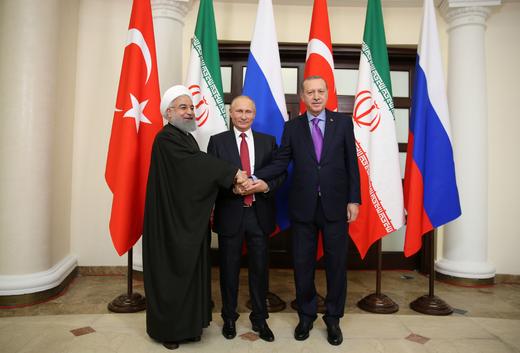 During a meeting with his Turkish and Iranian counterparts in Sochi, President Vladimir Putin praised a new stage in the Syria crisis, and a “real chance” of ending the 6-and-a-half year civil war there, but said that a political solution will require compromises from all sides. Iran and Turkey both support the convocation of a Syrian people’s congress in taking steps towards establishing inclusive dialogue. Later, at a conference of military leaders, Putin said that all large-scale Russian businesses need to be prepared to switch to military production at any time, “regardless of ownership”. The US is taking some “overdue” steps to retaliate against Russia’s violations of the Nuclear Forces Treaty (INF), reports the Moscow Times. The 2018 World Cup host city of Yekaterinburg will ban hunting and gun sales during the tournament. Vladimir Putin’s hastily curated “pantheon of heroes” is based on revisionist history, says this piece, and his recent celebration of Tsar Alexander III’s rule forgets the famine that killed half a million people.

Shares in gold producer Polyus fell yesterday after owner Suleiman Kerimov was detained in France; he will be put under a formal judicial investigation as part of a tax evasion case, and his detention has been extended. The Kremlin has vowed to do “everything in our power” to protect the lawful interests of Kerimov, who is worth an estimated $6.3 billion. The Kremlin has backed up earlier claims from the meteorological service that there is no proof that Russia was the source of the recent radiation spike in the Urals. State-run Russian Railways has allocated $17 million to a 580km railroad project that will connect Sakhalin island to the Russian mainland. CEFC China Energy Co has sold its first cargo of Russian crude following its $9 billion purchase of a stake in Rosneft.

The Federation Council has almost unanimously approved (with one abstention) the law that will classify media outlets as foreign agents. Soon Facebook users will be able to see whether they liked or followed any Russian “troll” accounts created to spread misinformation during last year’s US presidential election, using a specially designed tool.