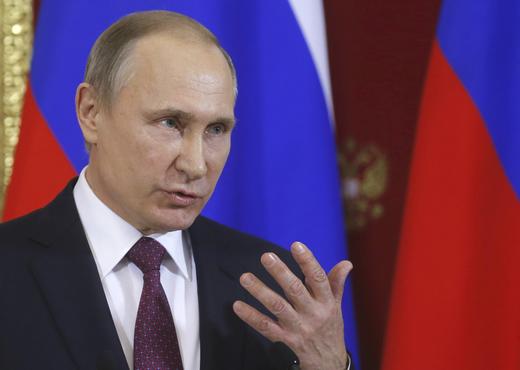 Moscow authorities refused a request for permission to hold a rally in Bolotnaya Square against the the State Duma’s move to decriminalise all acts of domestic violence, apparently because the square is too small to accommodate the thousands that are expected to attend.  If carried, the new law ‘would be a huge step backward for Russia, where victims of domestic violence already face enormous obstacles to getting help or justice’, says Human Rights’ Watch.  Former Exxon Mobil chairman and Russia favourite Rex Tillerson (narrowly, with all Democrats against and all Republicans for) has been approved as U.S. Secretary of State; he is widely expected to lift anti-Russia sanctions.  Foreign Minister Sergei Lavrov believes that Vladimir Putin and Donald Trump share the essence of their foreign policy ethos, in that neither is interested in ‘promoting various ideas and interfering in other countries’ internal affairs’.  He also pointed out the similarities between Trump and Putin’s foreign policy priorities (namely, their emphasis on fighting terrorism).

Alexei Navalny’s legal team’s motion that the judge scheduled to preside over his retrial recuse himself was rejected immdiately.  Russia overtook Saudi Arabia as the number one supplier of oil to China last year, for the first time ever.  Rosneft is requesting an audience with Vladimir Putin for Glencore, Intesa, and the Qatar Investment Authority, although it is not yet clear what is brewing.  The Moscow Times reports on former Finance Minister Alexei Kudrin’s plans for Putin’s re-election bid in 2018.  Russian lawmakers see the American withdrawal from the Trans-Pacific Partnership (TPP) trade deal as positive.  French presidential candidate Francois Fillon is speaking up against anti-Russia sanctions (‘totally ineffective’, he says).

The E.U. is allocating an extra €800,000 to its East Stratcom taskforce, which is planning to ‘collate and counter’ Russian misinformation and propaganda.  The absence of mention of the words ‘democracy’ and ‘NATO’ from Trump’s inauguration speech were music to chief Kremlin propagandist Dmitry Kiselyov’s ears.  Someone hacked the New York Times’ Twitter feed to post fake headlines warning of a Russian missile attack against the U.S.

PHOTO: Russian President Vladimir Putin speaks during a news conference after a meeting with his Moldovan counterpart Igor Dodon at the Kremlin in Moscow, Russia, January 17, 2017. REUTERS/Sergei Ilnitsky/Pool