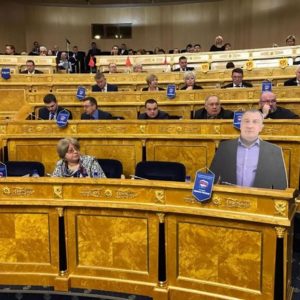 Opposition politician Vladimir Milov, who plans to lead an authorised march to commemorate slain Kremlin critic Boris Nemtsov on February 26 has reportedly been issued a two-page warning by Moscow prosecutors of potential repercussions in the event of ‘violations of public order or the law on public gatherings’.  The Economist reviews two new films about the life and death of the one time deputy Prime Minister, who was killed in 2015.  MP Vladimir Petrov has instructed an assistant to present a cardboard cut-out of himself to a meeting in regional parliament in an attempt to highlight chronic absenteeism and disinterest among his colleagues.  The Foreign Ministry website’s new ‘fake news’ fighting section has drawn derision from many corners – the BBC has a round up of some reactions.  In the town of Bogolyubov, a businessman’s attempts to establish a condom factory in a former brickworks are being thwarted by Orthodox protesters who decry birth control as ‘male abortion’.  The Orthodox order is hoping to build a new church in a pond in Yekaterinburg and coming up against protesters of its own.

In comments that have sparked outrage, Donald Trump’s chief of staff reportedly asked the FBI to refute media reports that campaign advisers were frequently in touch with Russian intelligence agents during the election.  Following the sudden death of Vitaly Churkin, the Kremlin has appointed diplomat Pyotr Ilyichev acting head of its mission to the United Nations.

President Putin has indicated that thousands of Russians are continuing to fight for militant forces in Syria.  At a meeting between Foreign Minister Sergei Lavrov and UN High Commissioner for Refugees, Filippo Grandi, it has been made clear that Russia contests the concept of sharing responsibility for the fate of refugees from the Middle East and North Africa.

PHOTO: A Russia MP has reportedly skipped a meeting in regional parliament, asking his assistant to bring a cardboard cut-out of himself instead.  The event occurred at a parliamentary meeting for the Leningrad region. (47news)