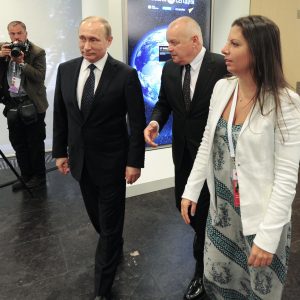 TODAY: Kremlin-friendly French presidential candidate Marine LePen through to second round; Washington says it will step up investigation into Trump’s Russia ties; allegations into Medvedev corruption will not be subject to probe; OSCE monitor killed in Ukraine; Moscow denounces it as ‘provocation’; Reuters loses deal over hacking expose; who is behind anti-Navalny campaign? Navalny, of course, says the Kremlin.

The Kremlin’s preferred candidate in the French presidential election, Marine Le Pen of the Front National, to whom the Kremlin allegedly donated funds, has made it through to the second round of the contest, amid widespread allegations of a ‘very overt effort’ on the part of Moscow to interfere in the election race.  The favourite to win the election, Emmanuel Macron, however, could be considered the least Kremlin-friendly option of the five leading candidates, according to this report.  That said, ‘Emmanuel Macron can hardly be considered a Russia hawk’, argues one analyst probing Russian influence.  Denmark’s defence minister has told the press that Russia has hacked the country’s defence sector, gaining access to employees’ emails in 2015 and 2016.   In the U.S., the House Intelligence Committee is apparently intensifying its research into Russian interference in last year’s U.S. election, which is just as well, argues this article, as currently the investigation has not a single full time employee.

An American OSCE monitor has been killed in Ukraine’s Donbass region, following a mine explosion – an incident which, to the mind of the foreign ministry, indicates ‘a high probability of a provocation geared at breaking down the settlement process‘.  U.S. Secretary of State Rex Tillerson has told Ukrainian President Petro Poroshenko that Moscow’s actions in eastern Ukraine remain an impediment to improved U.S.-Russian ties.  According to a new survey, with expenditure of $69.2 billion in 2016, Russia ranks third on the list of the world’s biggest defence spenders for that period.  Although the economy has recovered successfully from the recession, new data suggests that investment in Russia is sluggish.

News agency Reuters is paying for its decision to publish its expose on Russian interference in the U.S. election – Kremlin-owned news outlet Rossiya Segodnya will not go through with a major deal to buy Reuters’ video content from May this year.  The Federal Investigative Committee has formally declined to investigate allegations by Alexei Navalny’s Anti-Corruption Foundation that Prime Minister Dmitry Medvedev is the beneficiary of a vast property empire funded by graft.  Defying all logic, the Kremlin says that a new campaign designed to tarnish Navalny’s reputation (most notably by providing a Youtube video which compares him to Hitler) might have been launched by the man himself.  The aforementioned video has now been taken down.