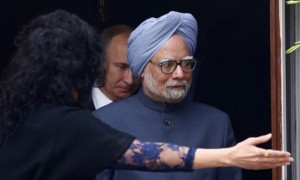 President Vladimir Putin made a successful visit to India, sealing $2.9 billion worth of arms deals, boosting military cooperation that had suffered in recent years as a result of unfulfilled agreements and lost tenders.  Praising ‘unique, special and privileged’ relations between the two, Putin also expressed hopes that Russia would be permitted to build nuclear power plants in India, and says he is committed to doubling bilateral trade by 2015.  As expected, the State Duma approved the law banning U.S. citizens from adopting Russian children in a 420-7 vote on Friday, although it still needs the president’s approval.  An online petition urging the U.S. government to add the names of legislators who support the bill to the Magnitsky List has received 32,000 signatures.  ‘It is well-known that the chances a child will die after being adopted by a family in Russia are almost 40 times higher than if adopted by a family in the West,’ argues Victor Davidoff.  Foreign Minister Sergei Lavrov is urging lawmakers not to cancel the original U.S.-Russia adoption agreement, even though he supports the bill.

Russia’s military presence in Syria could complicate any future U.S. attempts at intervention, says The Guardian.  The Investigative Committee has opened its third criminal case against anti-corruption campaigner Alexei Navalny, accusing him of embezzling money form the Union of Right Forces party in 2007.  Last week’s European Union summit saw clashes between E.U. and Russian interests as both sides sparred on political and energy-related issues and ‘made little progress’.  Russia apparently criticised an ‘uncivilised’ E.U. energy policy, and lambasted Ukraine for refusing a deal for cheaper gas that would involve it leasing out its pipeline.  There was also a dispute over measures to implement visa-free travel.  Lukoil says it has decided against joining a project to develop Iraq’s West Qurna-1 oilfield.

The imbalanced economies of both China and Russia are similarly hampered by vested interests’ desires to block reform, says the New York Times.  2012 was a good year for lawmakers in Russia – here’s a list of this year’s most high-profile legislation.  ‘Indefatigable dissident’ Vladimir Bukovsky turns 70 this week.