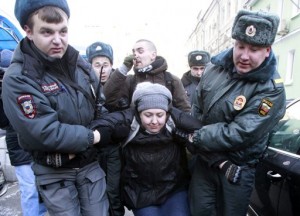 Kaliningrad has passed a bill to ban and impose fines on ‘homosexual propaganda’, as members of the State Duma prepare to vote today on a move to bring the ban into effect nationwide.  The Defence Ministry, in counter to reports released this week, says it will not seek to determine the sexual orientation of conscripts.  The A Just Russia party is threatening four of its members with expulsion if they do not abandon their roles in the Opposition Coordination Council.  A Duma deputy’s assistant and local lawmaker who fought against the development of Moscow forestland is in a critical condition after being stabbed in the chest by an unidentified assailant, with fellow activists immediately apportioning blame to the local administration.  The Council of Europe has accused Russian authorities of inflicting tortures on prisoners in the North Caucasus, after Russia itself authorised the publication of the findings.  Former Moscow police officer Pavel Karpov is suing U.K. businessman William Browder for the latter’s campaigns against corruption within the Russian system, which have seen him publicly accuse 60 officials, including Karpov, of involvement in the fraud case that lawyer Sergei Magnitsky had been investigating before his arrest and subsequent death.  A plan to convert a children’s cancer hospital into a medical center for top judges has been abandoned, apparently in response to public pressure.

The lawyer of detained opposition figure Leonid Razvozzhayev says that prison officials are attempting to ‘break’ his client into ‘confess[ing] to the charges’ and ‘implicate other key protest movement figures’.  A Levada Center poll says that public approval for President Vladimir Putin is at a 12-year low.  Putin says that recent revolts in Syria and Libya have unleashed instability in the Middle East and Africa.  The New York Times looks at Russia’s various efforts at Davos to ‘make a splash’ and ‘buff its image’.  Prime Minister Dmitry Medvedev’s meeting with his Georgian counterpart at a Davos reception is sparking hopes of warmed relations.

A new landmark $10 billion shale gas deal between Shell and Ukraine is the country’s ‘first major step away from dependency on Russian gas supplies’.  Central bank Deputy Chairman Mikhail Sukhov pointed out that, of the 48 banks that ended the year with losses, more than a quarter of them are majority-owned by foreigners.  There are two Russias, says this piece, one ‘modernizing’ and the other ‘retrograde’, and ‘the West should employ differing strategies in dealing with each of them’.