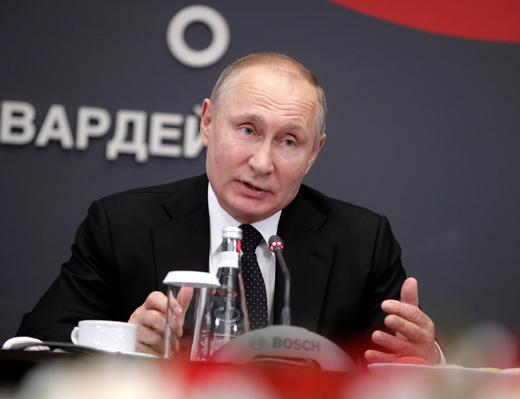 TODAY: Lukoil says oil price must be protected from explosive growth; Yamal LNG shipment to US reflects globalising market; Kostin says new sanctions would be economic war; US imposes North Korea-related sanctions; no plans to limit pre-election foreign media operations; Navalny back at ECHR; conflicts of interests between the old establishment and the new.

The unpredecented delivery of the Gaselys cargo of Russian LNG to Russia “reflects the realities of the globalising natural gas market”, says Reuters; there is speculation that the US may import LNG by Yamal, although it is currently under US sanctions. Lukoil CEO Vagit Alekperov says those involved in the OPEC production cut must take care to ensure prices do not grow explosively and hit $150 a barrel. VTB head Andrei Kostin says any further US sanctions levied against Russian banks would amount to “economic war”. The US Trump administration has imposed sanctions on business interests in Russia tied to the North Korean government and weapons program. Deputy Prime Minister Arkady Dvorkovich alleges that US officials are avoiding their Russian counterparts and “hiding from dialogue” at the World Economic Forum. The Kremlin slammed US accusations of Russian responsibility for chemical weapons attacks in Syria.

Kremlin spokesman Dmitry Peskov says he is not aware of any plans to temporarily block foreign media outlets from broadcasting in the run-up to the presidential elections in March. The State Duma has introduced fines for any encroachments on the law regulating the activity of media institutions labeled as “foreign agents”. Former presidential opposition candidate Alexei Navalny was at the European Court of Human Rights yesterday, presenting his case and claim that the authorities’ detentions of him, made in connection with his attempts to join demonstrations, were politically motivated. The court had already ruled that 7 of his arrests were illegal, but the Kremlin appealed. Reassuring aerospace factory employees in Bashkortostan, President Vladimir Putin gave details of a new state arms program that will guarantee stable inventory until 2027. Foreign Minister Sergei Lavrov gave a speech warning of the dangers of forcing certain values on other nations, blaming the current situation in the Middle East on “reckless social engineering”.

Russia’s conservative policies do not give a picture of the private lives of real Russians, says this piece. “There is an elite made up of old geezers and a new generation of Europeans […] in a state with an aging leader who has been in power for 17 years.” The distribution ban on the Death of Stalin film reveals Russia’s ongoing penchant for “old-fashioned conflicts of national interests and strategic advantages”, says the Independent. A 12 year old Russian girl is battling for women’s rights in a climate of sexist abuse. A Jewish student at Moscow State University was barred from taking an exam for refusing to remove his religious headgear. The International Olympic Committee says its purge of Russian athletes is an attempt to strike a balance between punishing Russia for systematic doping, and giving a new generation of clean athletes a chance.