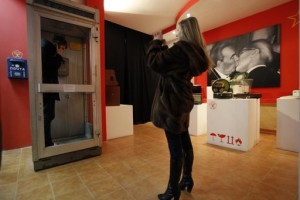 Supporters of opposition activist Sergei Udaltsov, who is currently under house arrest, paid Udaltsov’s $1,150 fine in coins, ‘to highlight the “miserly” way that the government has gone after the opposition.’  The house of Green Alliance party member and former Khimki mayoral candidate Oleg Mitvol was searched by investigators last week (Mitvol says his mother’s house was searched also).  United Russia’s Anatoly Lomakin left the party last week, apparently due to health concerns.  Under a new law signed by President Vladimir Putin, smoking in public places will be banned as of June 1.  U.S. Secretary of State John Kerry is meeting with Foreign Minister Sergei Lavrov in Berlin tomorrow to discuss adoptions and a Syrian settlement.  German President Angela Merkel says that China and Russia are coming to the realisation that the rule of Bashar al-Assad in Syria is coming to an end.  The brother of Max Shatto, the Russian child adopted by Texas parents who died in their care earlier this month, will not be repatriated, despite calls from lawmakers made in response to rumours that Shatto had been abused.  As part of broader plans to boost domestic adoption levels, the health minister has revealed a scheme to introduce a single system to monitor the health of Russian orphans.

Ukraine will not pay the $7 billion fine levied on it by Gazprom over unused gas from 2012, says Ukrainian President Viktor Yanukovych, who retains hopes nonetheless for ‘normal relations’. Russia has written off most of Cuba’s Soviet-era debt, and is planning to restructure the remainder over the next ten years.  Mikhail Prokhorov has sold his stake in Polyus Gold for $3.6 billion.  Rosneft has signed a strategic agreement with Italy’s Eni, and says it plans to take control of TNK-BP by April 1, three months ahead of schedule.

Deputy Prime Minister Dmitry Rogozin says that the implementation of a current, ambitious arms procurement program will turn Russia into ‘quite another country’ by 2020, in which ‘the cult of an engineer and constructor will be created’.  Chelyabinsk is still being gripped by ‘a kind of meteor fever’, as residents search fields for fragments.  Reuters reports on Russian influence in a popular Cypriot port: ‘Every single person in Limassol speaks some Russian.’  French actor and newly Russian citizen Gerard Depardieu has registered as a resident of Saransk.

PHOTO: A visitor poses for a photograph in a period phone box on display at the Museum of the Soviet Union in Moscow February 24, 2013. REUTERS/Sergei Karpukhin