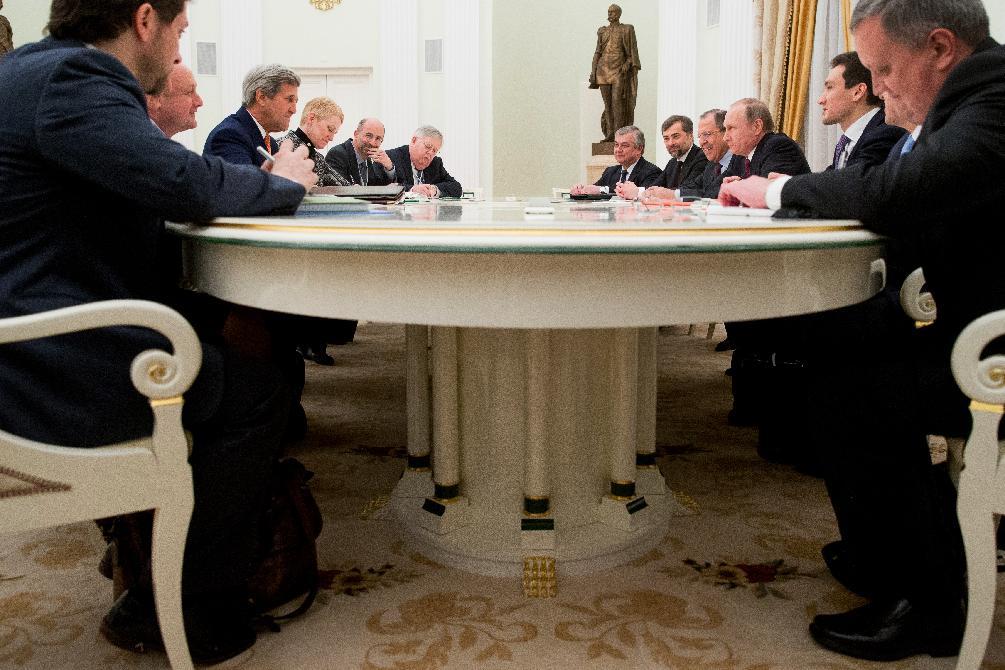 Foreign Minister Sergei Lavrov and US Secretary of State John Kerry said that their four-hour meeting yesterday on Syria and Ukraine produced productive dialogue.  The two have agreed to work on a draft of a new constitution for Syria by August, and will press the Syrian government to speed up talks on political transition.  (Kerry and President Vladimir Putin exchanged some light banter about the contents of Kerry’s red suitcase.) At peace talks in Geneva, the Syrian opposition says Putin is the only hope for progress in the peace process, saying that he must exert his influence on Bashar al-Assad.  Russia will export more oil to Europe in April than it has in any month since 2013, in spite of Moscow’s agreement with OPEC to freeze production, apparently due to planned maintenance at refineries that will reduce their processing capacity.  The Deputy Energy Minister says it is ‘technically possible’ to reduce Russia’s oil output by 5%.  With its budget slashed down to less than a third of its promised amount, Russia’s space program is on shaky ground.

At a meeting of the foreign investment commission, Prime Minister Dmitry Medvedev says Russia will continue to develop international investment cooperation in spite of sanctions.  The meldonium scandal reveals a crisis in Russian medicine, not just because of all of the doping cases that are emerging across the board of Russian sports, but because the drug doesn’t seem to have any medical benefits.  A total of $2.9 billion was lost from non-state pension funds in Russia last year.  Russians are becoming increasingly anti-Church, with protests taking place this year against the construction of new churches in Moscow and other regions.

Russia is getting agitated about ‘out of date’ maps which still portray Crimea as part of Ukraine.  Russian state television has lent its support to Donald Trump’s US presidential campaign, applauding him for being ‘ready to find a common language with Putin’.

PHOTO: Secretary of State John Kerry, third from left, meets with Russian President Vladimir Putin, third from right, at the Kremlin in Moscow, Russia, Thursday, March 24, 2016. Kerry is in Russia for talks on Ukraine and Syria as the terrorist attacks in Brussels underscored the urgency of fighting the Islamic State group. (AP Photo/Andrew Harnik, Pool)