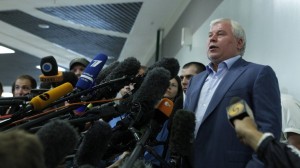 In the wake of the detention of four Dutch citizens in Murmansk last week on ‘homosexual propaganda’-related charges, the international community is beginning to express concerns over the impact of anti-homosexual legislation on those traveling to Russia for the Sochi Olympics next year.  Six gay rights activists were detained and released in Moscow yesterday for holding an unauthorised rally near a children’s library.  ‘Russia’s “propaganda law” is staggering in its disregard for the founding principles of a democracy,’ says The Guardian, and asks why the pro-LGBT National Hockey League isn’t standing behind a boycott of Sochi.  The guilty verdict for Alexei Navalny was a ‘tactical error’, says Boris Kagarlitsky, demonstrating the authorities’ inability ‘to assess the consequences of their actions’.  This Reuters blog speculates that the Kremlin regrets the guilty verdict.  Jailed Pussy Riot member Maria Alyokhina has been denied parole for a second time: her lawyer called the decision ‘legally unfounded’.  Former Defense Minister Anatoly Serdyukov is refusing to testify as a witness in the ongoing Defense Ministry fraud probe, and is unlikely to face prosecution due to the amount of information he has, as a former Kremlin employee, about other senior officials.

The five men on trial for the 2006 murder of journalist Anna Politkovskaya have all pleaded not guilty.  The retired police officer accused of the murder of Sergei Magnitsky is suing William Browder, Magnitsky’s former employer, sparking speculation as to who is paying his legal costs – Browder’s lawyers suggest the case was instigated from within the Kremlin.  According to his laywer, National Security Agency whistleblower Edward Snowden will remain in the transit zone in Moscow for the time being, but that, although he hopes to be granted asylum to live there permanently, his request has not yet been resolved.  The United States is seeking clarification on Snowden’s status, and said it would be ‘deeply disappointed’ if he is allowed to leave Sheremetyevo Airport.  ‘The ordeal’s only victor is Putin,’ says Lilia Shevtsova.

Greenpeace Russia says that the quantity of industrial pollutants in the Moscow River exceeds safety limits.  Despite its stated aims, the European Union is likely to have Russia as its biggest provider for at least another decade due to forecasted growth in demand, new research suggests.  Energy company Novatek is benefiting from the melting of the polar ice cap.  Central Bank Chairman Elvira Nabiullina wants to slow the market for unsecured consumer loans.  Are Russia’s high interest rates the result of long-term systemic corruption?

PHOTO: Anatoly Kucherena (R), the Russian lawyer assisting former U.S. spy agency contractor Edward Snowden, speaks to the media at Sheremetyevo airport in Moscow July 24, 2013. Snowden has no immediate plans to leave Russia, Kucherena, who is assisting him in his request for temporary asylum, said on Wednesday. REUTERS/Maxim Shemetov