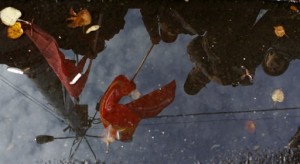 United Russia have approved the nomination of nationalist and A Just Russia member Aleksei Mitrofanov as chairman of the Duma’s new media committee, as Ilya Ponomaryov, another A Just Russia deputy, has his voting rights suspended for calling United Russia a party of ‘crooks and thieves’.  The party’s bill to ban state officials from owning foreign property and bank accounts has been deemed unconstitutional – by the party.  In accordance with the new law banning radio broadcasting by companies majority owned by foreign individuals, Radio Free Europe/Radio Liberty will switch to multimedia Internet broadcasting on November 10.  Brian Whitmore looks back at the day in 2011 when Dmitry Medvedev announced that Vladimir Putin would run for president.  Masha Gessen has been appointed director of the broadcaster’s Russia service.  Gessen defends her love of Russia and discusses the ‘primitive patriotic rhetoric’ driving the Kremlin’s new definition of high treason in today’s New York Times.  Economist Sergei Guriev says a sharp drop in the price of oil could sink Putin’s rule ‘overnight’.  The Kremlin wants foreign aid out of Russia, but one survey suggested that only 25% of Russians believed the election protests were the result of foreign interference.

This report says that the AAR consortium is considering making BP an offer for its entire TNK-BP stake.  BP was in this same position 18 months ago, says Forbes, and Rosneft has always been ‘the only realistic option to ease BP out of its AAR nightmare’.  Together with ExxonMobil, Rosneft is aiming to drill near a toxic Soviet atomic wasteland in the Arctic, despite ecologists’ concerns.  Gazprom says that the European Commission must take its pricing dispute directly to the ‘appointed Russian government body’.  Hints that the government will cut taxes for remote oil fields in Krasnoyarsk and Irkutsk by 45% has raised stock futures.

The firm that provides Internet access in Daghestan has blocked access to YouTube to prevent access to a film that mocks the Islamic faith; Internet providers in Chechnya have been advised to do the same.  Mobile Telesystems’ contract with Yevroset is at risk.  The Independent explains the recent row that led to MTS losing its contract in Uzbekistan.

PHOTO: Participants are reflected in a puddle during a communist rally protesting against rises in communal charges in Moscow September 22, 2012. REUTERS/Maxim Shemetov