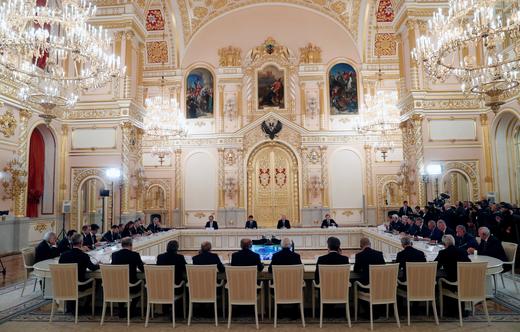 Kremlin spokesman Dmitry Peskov responded to US President Donald Trump’s assertion that, after leaving the Intermediate-Range Nuclear Forces (INF) Treaty, the US will develop new intermediate-range missiles. “It will make the world more dangerous.” President Vladimir Putin said any European countries that agree to host US nuclear missiles would be putting themselves at risk of a Russian counter-strike, and that Washington’s withdrawal from the treaty will lead to a new arms race. Foreign Minister Sergei Ryabkov noted that the US has withdrawn from several international agreements, not just the INF treaty. “We do not know if there is an end to this road,” he said. Vladimir Frolov argues in the Moscow Times that the treaty was already more beneficial to NATO and the US than to Russia, and that Russia was never comfortable with it, threatening to withdraw itself in 2007, and subsequently finding ways to exceed its limits. NATO, like the US, says the pull-out is Russia’s fault. According to former Polish President Lech Walesa, the only way to manage aggressive foreign policy from Moscow is by creating international solidarity, because “[Russia] has always been ruled by using the threat of an enemy to sustain unity.”

Visiting Moscow, Italian Prime Minister Giuseppe Conte called for an end to EU sanctions against Russia. Italy intends to boost trade ties with Russia in spite of restrictions: their current trade volumes, at $24 billion in 2017, are half what they were before EU sanctions were implemented. Conte and Putin discussed the creation of an investment platform to help Italian companies integrate with the Russian market. The US is still deliberating on whether or not to extend its sanctions against Russia. The Finance Ministry is giving Putin’s administration an expense boost of $26 million this year (to increase events budgets and presidential staff salaries). Finance Minister Anton Siluanov forecasts the value of the Kremlin’s prospective investment projects with major firms at $700 billion.

Russia is blocking a deal between US satellite start-up OneWeb and Roscosmos that would extend Internet access to Russia’s most remote regions. The FSB says the project is too risky in terms of security, as it would make some regions entirely dependent on a foreign satellite.