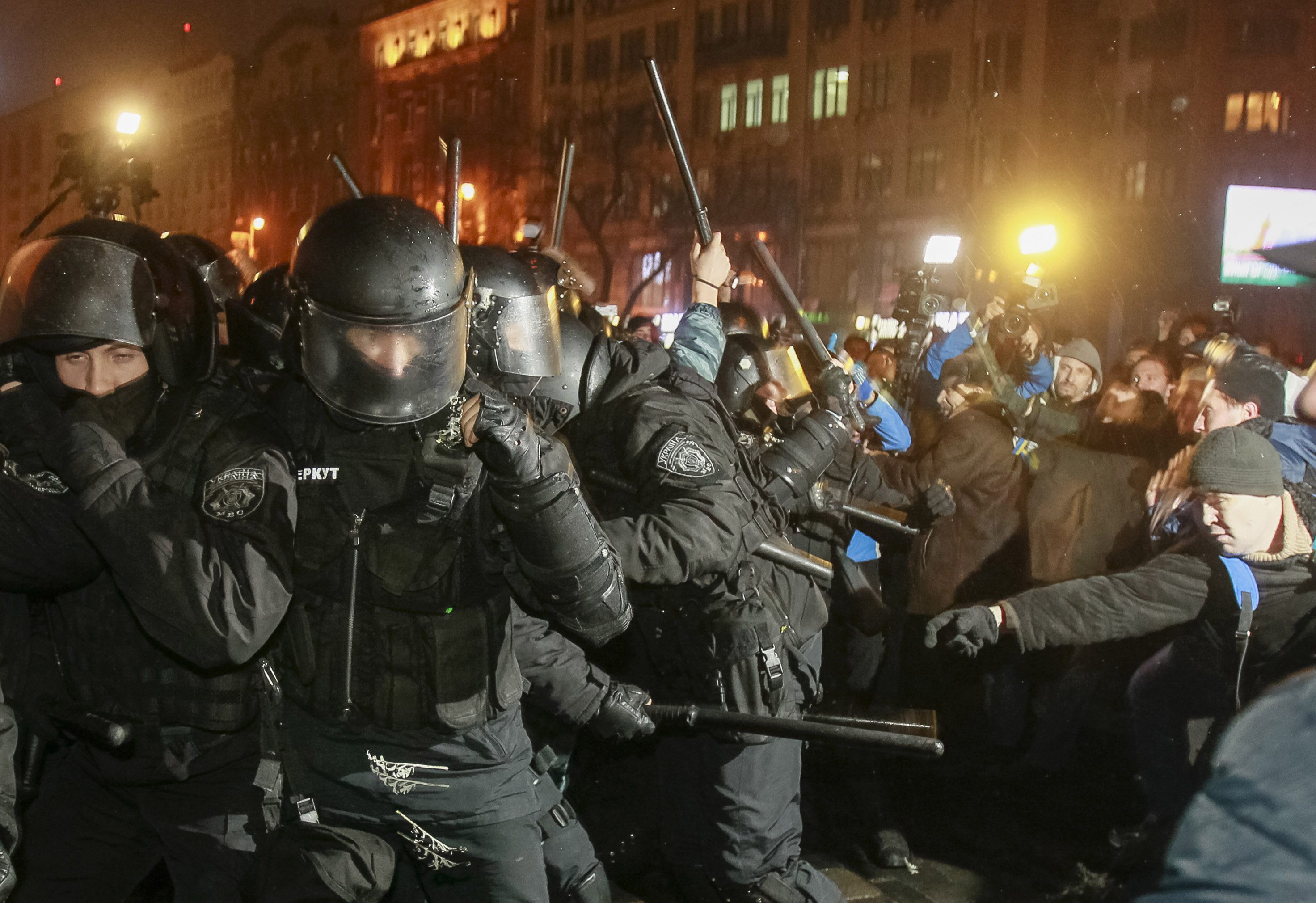 ‘Tens of thousands’ of Ukrainians took to the streets of Kiev yesterday to protest the government’s decision to re-open dialogue with Russia and abandon its planned trade agreement with the European Union: ‘We already were under Russian rule for hundreds of years.’  But the move is already proving effective – according to Ukrainian Prime Minister Mykola Azarov, Kiev has finally secured a meeting with Moscow to review their existing gas contract.  President Vladimir Putin accused the E.U. of ‘pressure’ and ‘blackmail’ in the wake of Ukraine’s decision, but defended Russia’s stance, saying that Russia would have had no choice but to restrict Ukrainian exports if it had gone ahead with its E.U. deal.  German Chancellor Angela Merkel has vowed to speak to Putin about the Kremlin’s pressure on former Soviet Republics in response to their efforts to forge ties with Europe: ‘We’re going to have to speak with Russia so that there isn’t always this situation where it’s either/or.’  How will Europe cope with the high volume of Russian diesel that is due to flood its market once Russia’s new distillation units are ready for use?  The Serbian section of the South Stream natural gas pipeline is underway, as the President praised the project: ‘Russian gas is the realization of Serbia’s energy dream’.  Bloomberg discusses Vladimir Putin’s plan to freeze prices at powerful state companies like Gazprom, starting next year, in a widely unpopular bid to boost efficiency.  The FT slams Russia’s ‘innocuous-sounding projects such as the “customs union” [which] have only one aim: pass sovereignty to Russia and destroy competitive industries in the neighbourhood.’

A U.S. asset management ‘giant’ pulled over $100 million from its Russian investments last week.  Dmitry Peskov explains why it is difficult to argue with President Vladimir Putin.  Where has Russia’s money gone?  Reuters has some ideas (capital flight, mandatory dividends, underpriced assets, etc.), whilst the Telegraph discusses the country’s ‘parlous’ economic situation.  ‘Although many analysts have praised the central bank’s new governor, Elvira Nabiullina, for taking tough steps against Master Bank, some have questioned why it took so long.’  Russia will upgrade Egypt’s ballistic missile system to fulfill some of the terms of its arms deal.

A top Kremlin official says that Greenpeace protesters released on bail will be allowed to leave Russia – although he did not indicate how they would do so, or address the problem of their lack of visas.  Bolotnaya Square trial defendant Sergei Krivov ended his hunger strike last week.  A controversial film documenting the corruption behind planning for the Sochi Winter Olympics screened last night in Amsterdam, in defiance of Russian pressure.

PHOTO: Riot police stand guard as they clash with protesters during a rally to support EU integration in central Kiev November 24, 2013. REUTERS/Gleb Garanich