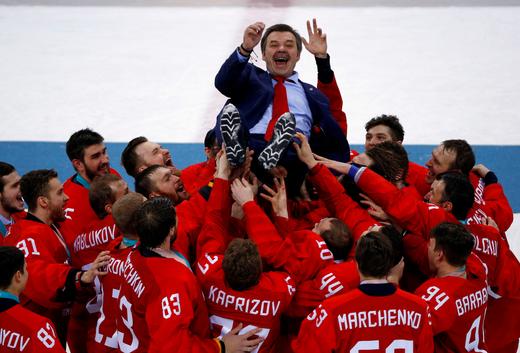 US intelligence sources are claiming that Russian military spies hacked official Olympics computers in South Korea, disrupting broadcasts and interfering with ticket printouts, and tried to blame it on North Korea; they say the attack was retaliatory against the IOC’s banning of the Russian team for doping. The official concluding ceremony yesterday saw Russia marching under a neutral flag, despite earlier reports that it might be able to fly its own flag, possibly due to the two doping cases that were confirmed last week in curling and bobsledding. Alina Zagitova nonetheless won a gold medal for Russia in figure skating. The UN ceasefire agreement on Syria has not led to any decrease in fighting in Ghouta; the Guardian says the blame lies squarely with Russia. President Vladimir Putin held a call with his French and German counterparts yesterday to discuss the Syrian conflict in which he explained that the ceasefire does not extend to military operations against terrorist groups.

An authorised march in downtown Moscow honouring the memory of murdered opposition politician Boris Nemtsov drew 4,500 people, according to state news, with many more gathering in cities across Russia to mark the third anniversary of his death. RFE/RL says the Moscow number was reported by other sources as 7,600. Prominent opposition figures attended the march, and participant signs noted the fact that Nemtsov’s killer has still not been found. “The march is symbolically important for the entire democratic opposition,” said Ilya Yashin, who helped organise the march. Leonid Volkov, the campaign manager for opposition leader Alexei Navalny, has been given a 30-day jail sentence for tweeting a video calling on people to protest next month’s presidential election; he will not be released until after the vote. With three weeks to go, all of the candidates will be appearing daily in television debates – except Vladimir Putin.

Putin spoke to Sberbank head German Gref about the importance of keeping up with technological developments in blockchain, although he never mentions it by name. Putin’s former judo partner, Arkady Rotenberg, has lost a freedom of speech fight in the courts that allows him to be named in the press in relation to his divorce dispute. It has been alleged that a former journalist with the Telegraph newspaper spied for Communist Russia.