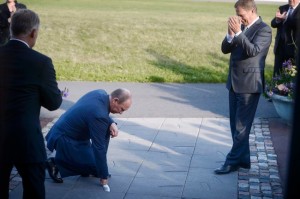 President Vladimir Putin was in Finland yesterday, where he spoke on three controversial issues.  He denied that gay rights were violated in Russia by a recent law banning the promotion of ‘homosexual propaganda’; he defended the law that orders foreign-funded NGOs to register as ‘foreign agents’, saying that it was aimed at protecting domestic policies; and he admitted that NSA whistleblower Edward Snowden is in the transit area of Sheretmetyevo Airport in Moscow.  Human Rights Watch reviews the NGO law, which has thus far affected 62 organisations.  Regarding Snowden, Putin’s position is that he will not be extradited because Russia does not have an ‘international agreement on extradition’ with the U.S., effectively making Snowden a free man. Putin also said that U.S. accusations against Russia were ‘drivel‘, and referred to Snowden as a ‘human rights activist’, indicating double standards in any officials U.S. criticism of Russia’s practices.  Both Putin and Foreign Minister Sergei Lavrov indicated that the fact that Snowden is in a transit zone means that he cannot be seized (explaining Lavrov’s statement that he ‘did not cross the Russian border’), but the Washington Post says that, under Russian visa rules, Snowden’s being there for more than 24 hours means he would have had to be given a visa.  A WikiLeaks source speculated that Snowden may be stuck in Russia, with other sources suggesting that he may be talking to Russian secret services.  This piece says that Snowden’s worth to Russia is not in intelligence, but as a cold war pawn who can help Putin ‘stick it to the West’.

A report released by the Parliamentary Assembly of the Council of Europe (PACE) on the death of Sergei Magnitsky sharply criticises Russia for failing to penalise those responsible.  In the report, the author Andreas Gross, calls on authorities to explain why there are two different versions of Magnitsky’s death report, and alleges a ‘high-level cover-up’ of an ‘appalling’ case.  He calls for ‘intelligent sanctions’ (although he could not specify what this would mean), and said that a U.S. style blacklisting of those thought to be responsible for his death would be counter-productive.  All twelve defendants at the Bolotnaya Square trial, which opened yesterday, denied charges of taking parts in riots and committing violent acts against police.  A third of Russians support parole for jailed former Yukos head Mikhail Khodorkovsky, whilst only 16% think he should remained imprisoned, according to a Levada Center poll.  The popular daily website Gazeta.ru has been blocked by Rostelecom in Ulyanovsk, supposedly for distributing material that ‘promoted bribery and undermined the authority of the state power’.

PHOTO: President Vladimir V. Putin of Russia in Finland on Tuesday. He said Edward J. Snowden could go where he wanted. (Antti Aimo-Koivisto/Lehtikuva, via Reuters)