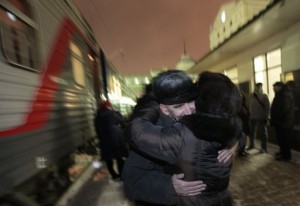 Over 250 inmates at the prison in Kopeysk, Chelyabinsk have been on strike since the weekend, demanding more relaxed conditions and protesting against beatings.  Reports indicate that eight policeman were injured in their attempts to disperse a crowd that had gathered at the prison to witness the inmates’ roof-top protest.  Under a recent Supreme Court decision, Internet providers are facing increased competition to block websites without direct state interference through emphasis on the implementation of new content restrictions.  A new report by the United Nations’ Committee Against Torture criticises Russia for failing to investigate widespread allegations of torture and of intimidation against human rights advocates and journalists.  Russia is apparently taking precautions in Gaza by sending warships to wait off its coastlines, in case violence erupts and its Russian citizens need to be evacuated.

Ex-Defense Ministry official Yevgeniya Vasilyeva has been put under house arrest after being charged with large-scale fraud.  Evgeny Lebedev, the son of media mogul Alexander, says his father anticipates that he will go to jail over his role in a television punch-up last year, and that there may be ‘a contract out on his head’ which could see him attacked during his imprisonment.  Prime Minister Dmitry Medvedev says that France’s support for the Syrian opposition is ‘unacceptable’, and says he does not rule out a second run at the presidential role.  The Magnitsky List isn’t worth the diplomatic tension it will cause, says Mark Nuckols.

An exhibition of Russian art at London’s Saatchi gallery draws attention to the country’s political history, says The Guardian.

PHOTO: Russian physicist Valentin Danilov embraces a friend near a train before leaving for Novosibirsk, the day after he was released from a penal colony. (Photo By ILYA NAYMUSHIN/REUTERS)