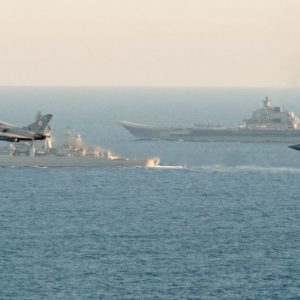 ‘Engage but beware’ should be Britain’s mantra when it comes to dealing with Russia, says British Prime Minister Theresa May ahead of her hotly anticipated meeting with U.S. President Donald Trump at which relations with Moscow are like to loom large.  British Defense Secretary Michael Fallon has engaged the Kremlin in a war of words by branding aircraft carrier the Admiral Kuznetsov Moscow’s ‘ship of shame’ after its involvement in the war in Syria.  Fallon has asserted that the British navy will be man-marking it on its journey through the English Channel to protect the UK.  His comments have been ridiculed by the Kremlin, which suggested that the minister should focus his attention on the state of his own navy, which leaked reports suggest has witnessed a series of missile failures.  It seems Britain might be coming round to Russia’s way of thinking on Syria’s Bashar Al-Assad.  Donald Trump’s plans to create safe havens in northern Syria have been received unenthusiastically by Moscow, who has noted it is crucial not to ‘exacerbate the situation’.

Journalist Luke Harding, a veteran FSB harassee, discusses the hacking scandal with NPR.  Senator John McCain has openly warned that the Trump administration has no defence strategy against Russian attempts ‘to influence elections in France and European countries in the coming months’.   China’s option is, according to the presidential aide for Internet development, ‘the only way’ to retain control of information security.  It is hoped that a European Court for Human Rights ruling, that stipulates that U.S. families who were unable to adopt Russian babies as a result of the adoption ban are owed financial compensation, might pave the way for the overturning of the ban.

Russian consumers can look forward to a flat pack with a slimmer price tag as furniture giant IKEA plans to cut prices by up to 40% in response to the limited purchase power of Russian citizens.  A venture between miner Polyus and state-owned Rostec (run by a close Putin associate) have swooped to victory in a ‘barely contested’ government auction for the vast Sukhoi Log gold field.