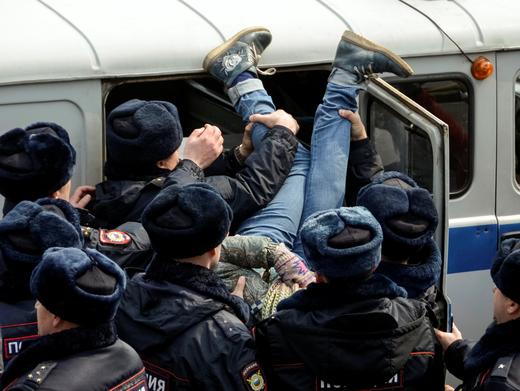 TODAY: Hundreds aggressively detained as thousands gather across Russia in protest against corruption and President Vladimir Putin’s regime, Navalny and 16 of his colleagues among those held by police; Voronenkov’s killer identified by Ukraine as a Russian agent; Foreign Ministry disappointed with extended US sanctions; Kremlin may halve current number of “foreign agents”; Putin meets with Le Pen to say he has no intention of influencing French presidential election outcome.

In the largest demonstrations since 2012, when Vladimir Putin won his constitutionally disputed third term in office, thousands gathered in dozens of cities across Russia in protests that, in 72 out of 99 of the cities that took part, were not authorised by the authorities. The protests were called by anti-corruption campaigner Alexei Navalny, and ostensibly as such directed against corruption, but many protesters held anti-Putin signs (one man brandishing a ‘Putin 666’ sign was tackled by police). ITAR-TASS estimates that 7,000-8,000 people gathered in Moscow; 10,000 participated in St. Petersburg, where 100 were detained. RT puts the number of Moscow detainees at 600, citing official police reports, and notes the wide commentary regarding officers’ excessive use of force. The number of Moscow detainees may in fact be as high as 800, and included seventeen employees of Navalny’s anti-corruption foundation. The Washington Post has an image gallery mostly depicting various individuals being hauled off by police, many of them swept off of their feet by numerous officers. (RFE/RL and the BBC have video.) Unlike most news outlets, which focused on the volume of protesters and arrests, Sputnik’s main coverage of the rally related to the arrest of Alexei Navalny himself, who was detained early on in the day. Protesters on foot and in private vehicles blocked the police bus Navalny was transported away in. Buzzfeed notes that the Trump administration had no immediate statement in response to news of the protests and detentions. Communist Duma members are pushing for a parliamentary investigation into the claims of corruption against Prime Minister Dmitry Medvedev leveled against him by Navalny’s foundation. Prosecutors in Volgograd want dissidents punished for digitally altering an image of the city’s Motherland statue with its face painted green.

The news of the weekend’s protests has all but subsumed Friday’s news that Ukrainian officials identified the killer of Russian opposition figure Denis Voronenkov as Pavel Parshov, a Russian agent (a claim promptly denied by Dmitry Peskov). The Foreign Ministry expressed disappointment in response to the news that the US had expanded sanctions to include a further eight Russian companies, bemoaning the Trump administration’s failure to “even name the reasons” for the move, although according to a US official, it was made in relation to Russia’s alleged violation of a US non-proliferation law from 2009. Following analysis from a presidentially appointed working group, the Kremlin may cut in half its registry of “foreign agents”. Russia’s Central Bank is making preparations for oil prices to hover around $40 a barrel for years to come. 26% of Russians now believe that the three-year-old ban on Western food imports is doing more harm than good.

Vladimir Putin met with far-Right French presidential candidate Marine Le Pen on Friday, saying he has no intention of influencing the outcome of the French elections. Unsurprisingly, Le Pen called for an end to anti-Russian sanctions. Russia’s “appetite for hegemony” is unlikely to stop with Ukraine, writes Pavlo Klimkin. The Guardian reports on Vladimir Lenin’s love of literature (he was a fan of Goethe in particular).