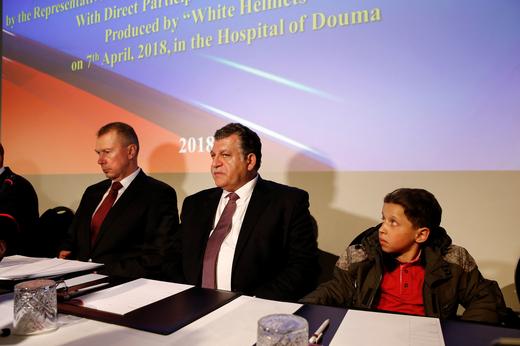 Russia brought 17 Syrians from Douma, including children and a hospital physician, to the headquarters of the Organisation for the Prohibition of Chemical Weapons in the Netherlands yesterday in a bid to prove their claim that the chemical weapons attack reported in Syria earlier this month was staged. One boy said he was not sure why he had been doused with water in the hospital. France dismissed the event as an “obscene masquerade”; and the UK commented, “the OPCW is not a theatre”. The Defence Ministry says it will be delivering new air defence systems to Syria imminently. The Armenian government has sent emissaries to Russia for talks on their current political crisis, but this piece argues that Russia will not be intervening in the situation any time soon. Despite the extensive measures taken by the Kremlin in its bid to block messaging app Telegram, even its spokesman Dmitry Peskov says he is still using the service. One Russian venture capitalist told Forbes that the Telegram ban “is worse than the impact of sanctions. It’s absolutely costing innocent companies billions of dollars, including American companies.”

Moscow City Hall has given permission for an anti-Kremlin demonstration in the city the day before Vladimir Putin’s inauguration. Oligarch Oleg Deripaska has no plans to cede control of United Co Rusal, despite the company being hard hit by sanctions and the US’ hint that it would lessen them if he were to step down; Bloomberg considers the likelihood of a standoff. Rusal has lost its top trader due to fears that he could be personally affected by US sanctions under a provision that apply secondary sanctions to those helping facilitate “significant transactions” with the company. Germany is anticipating losses of 1.5 billion Euros as a result of US sanctions against Russia. Moscow is still hoping that the EU will be able to persuade the US to ease the new restrictions. A number of EU lawmakers are calling for a European version of the Magnitsky Act to punish Russian businessmen for money-laundering within the bloc.

The Central Bank will have to bail out Asian-Pacific Bank and revoke the licenses of two others. Gazprom will boost output by 1% this year, on the back of this summer’s European demand being higher than usual, thanks to the coldest winter since 2012.