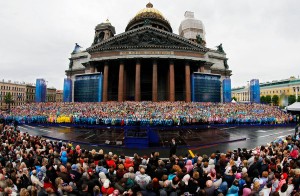 30 gay rights activists were arrested at a rally outside the Duma in Moscow on Saturday, and several were attacked by Orthodox Christians.  Rally organiser Nikolai Alexeyev, who was among those arrested, said, ‘Putin is personally responsible. If he gives the order to allow gay pride events, then people’s perception of the gay community will radically change.’  Several dozen were arrested at a separate event outside City Hall, which had refused to sanction the protests.  All those detained have since been released.  The Regional Development Ministry says that 11 tolerance centers are to be opened in Russian cities by 2015.  Rights group Memorial, which appealed to a Moscow court to defend itself against raids by prosecutors, has had its appeal rejected after the raids were ruled legal.  Veteran rights activist and campaigner Lyudmila Alexeyeva writes in The Guardian on Vladimir Putin’s bid to destroy Russia’s ‘civil society’, blaming the Kremlin’s definition of politics as activity that influences public opinion.  Elections watchdog Golos says it prays it will not receive any more international prizes for its work, as they come with foreign money and the order to register as a ‘foreign agent’.  This piece discusses flare-ups of anti-Semitism in the Russian press; where is Russia’s protest literature?

Prime Minister Dmitry Medvedev attempted to end speculation about the security of his position in the Kremlin by offering his close personal relationship with Vladimir Putin as a guarantee of his political longevity.  Popular online social network VKontakte was banned last week by ‘mistake’, supposedly after the accidental ticking of a box.  Nonetheless, the network has been subject to ‘a meticulous and methodical effort to bring [it] under the control of the Kremlin’, and its founder, Pavel Durov, has left Russia.  Interpol has denied Russia’s request to monitor William Browder, the former employer of Sergei Magnitsky, after ruling that the request was ‘predominantly political’.  Information about Browder has been deleted from its databases – ‘a rare rebuke of Russia for trying to use international law enforcement agencies in a political dispute’, commented the New York Times.  Is the trial against media tycoon Alexander Lebedev part of a bid to seize his multibillion-dollar assets?

Kyrgyzstan’s government has approved the sale of its national gas company, Kyrgyzgas, to Gazprom.  Georgia says it is ready to provide Russia with security assistance during the 2014 Olympics in Sochi. The U.S. authorities are working with the Interior Ministry and granting Russia access to some F.B.I. information relevant to the Boston bombing investigations.

PHOTO: Over 4,000 people assembled on Sunday, May 26, 2013 near St. Isaac’s Cathedral in St. Petersburg, Russia to perform as a choir. (Dmitry Lovetsky/Associated Press)