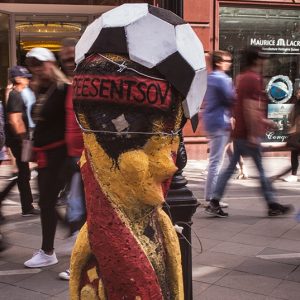 Activists have held a covert protest in Moscow urging the Kremlin to free Oleg Sentsov, the jailed Ukrainian filmmaker who is currently on hunger strike, using a 1.5 meter-tall mock-up World Cup trophy with the slogan “#Free Sentsov”. Good news for another jailed Ukrainian: activist Igor Movenko is set to be released after a court in Russian-controlled Crimea shortened and suspended his politically charged prison sentence. The Ukrainian parliament’s human rights commissioner Lyudmila Denisova has proposed new conditions to her Russian counterpart Tatyana Moskalkova for “synchronized and mutual” visits of prisoners in the two countries’ territories, following incidents on both sides in which ombudswomen were not allowed to visit detainees. Authorities have reportedly given the go-ahead to union-led protests against the Kremlin’s proposed retirement age hike in 30 cities, including one World Cup host city. Concerns about censorship have been raised after copies of a newspaper in rural southern Russia were seized by authorities after it covered the government’s controversial proposal to raise the retirement age. Billionaire Mikhail Prokhorov has won a lawsuit against Alexei Navalny over bribery claims, which the opposition politician now has to retract within ten days.

Energy Minister Aleksandr Novak has met with his US counterpart Rick Perry and US Treasury Secretary Steven Mnuchin to discuss energy and the matter of Washington’s sanctions on Russia. Novak apparently urged the United States not to politicise the controversial Nord Stream-2 pipeline project. The Russian military’s main air force base in Syria has announced the end to a ceasefire agreement reached with the US and Jordan in southwest Syria,as a result of breaches by insurgent groups. The Russian ambassador to Bosnia-Herzegovina will not visit the Srebrenica memorial complex, after the town’s Muslim Bosniak deputy mayor turned down his request on the basis of “Russia’s position on this issue” (Moscow has vetoed UN resolutions that would categorise the 1995 massacre of 8,000 Muslims as genocide).

President Putin has dismissed his representative in the Urals federal district, Igor Kholmanskikh, a former tank-factory foreman he had personally elevated to the post after an encounter with Kholmanskikh on a live television broadcast. The fortunes of another of Putin’s TV acquaintances, Ukrainian born woman Irina Barakat, have, it seems from this report, been more successful.

PHOTO: Russian activists on June 26, 2018, held a covert protest on a central Moscow thoroughfare popular with fans watching the World Cup, calling on the Kremlin to release a hunger-striking Ukrainian filmmaker held in a Siberian jail. (Reuters)