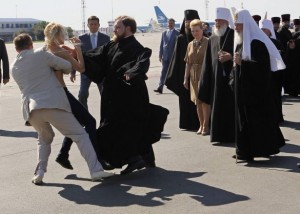 Hundreds of opposition supporters (the police say 500-800, the opposition say 3,000) gathered in Moscow yesterday to demand the release of activists arrested prior to Vladimir Putin’s third presidential inauguration, leading to at least four detentions.  On the same day, two further activists were arrested for their participation in an anti-Putin protest in May, a signal that the Kremlin is ‘hardening its stance toward the opposition’.  Alexei Navalny says that Investigative Committee head Alexander Bastrykin fits the label of ‘foreign agent’ for concealing his real estate interests in the Czech Republic.  A recent (and allegedly misleading) VTsIOM poll says that 64% of its respondents opposed foreign-funded NGOs that are ‘politically active’ in Russia.  But, says Michael Bohm, ‘these NGOs serve the Russian people much more than they do foreign interests’.  A Moscow district court refused to order the return of the $1.5 million in cash seized from Ksenia Sobchak’s apartment in a raid last month.

International Tribunal the Stockholm Chamber of Commerce has ordered the Russian government to compensate a group of Spanish investors who lost an undisclosed amount of money in the downfall of Yukos.  It also ruled that Russia used ‘illegitimate’ tax bills to bankrupt and nationalise the company.  Shell is looking to fix a profit slump by expanding in Russia.  A Russian journalist explains his barring from the Russian embassy in Washington, which he says is a retaliatory measure taken in reponse to his advocating the U.S. adoption of the Magnitsky Act.

Alexander Zhukov, the president of Russia’s Olympics committee, has accused the London Olympics committee of political motives in banning Belarusian President Alexander Lukashenko.  A U.S. congressional committee has voted to lift Cold War restrictions on Russian trade, raising hopes that the same measure will be passed by Congress before the summer break.  Official forecasts for this year’s harvests are likely going to have to drop, given the increasing number of regions declaring drought-related states of emergency.

PHOTO: An activist is detained as she protests the visit of Russian Orthodox Patriarch Kirill, second right, at Kiev’s airport on Thursday. Ukrainian Political group Femen said the protest was made to draw attention to Kirill’s support of the continued custody of Pussy Riot. (Gleb Garanich / Reuters)