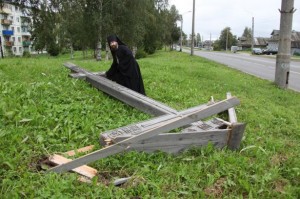 Garry Kasparov has been acquitted of participating in a rally in support of Pussy Riot; Kasparov commented that ‘for the first time in our courts the evidence of a policeman was not accepted just because he wears a uniform’.  Kasparov’s full statement is here, together with allegedly falsified police reports relating to his arrest.  Two members of the collective still at large have fled Russia in order to avoid prosecution.  Vandals have been cutting down wooden crosses in Arkhangelsk and Chelyabinsk, leading the Orthodox Church to call for their capture and punishment and sparking fears of religious unrest; the husband of Pussy Riot member Nadezhda Tolokonnikova condemned such actions. ‘Tolokonnikova directly referred to the group’s punk antics as equivalent to the truth-telling “holy fools” of centuries past and embraced the idea that their prison sentence proves the virtue of their cause.’  The Foreign Intelligence Service is developing systems that will monitor blog content and influence public opinion via social networks.

Ukrainian President Viktor Yanukovich hinted that he may soften his stance on gas prices in a bid to win Moscow’s support ahead of the October presidential elections.  Greenpeace activists have made their second attack on one of Gazprom’s Arctic oil rigs this week, after their first round of protesters were allegedly pelted with bits of metal by Gazprom employees.  Horizontal drilling is taking off in Russia and will grow faster there than in the U.S.

TNK-BP’s Russian partners have once again denied any links to the AAR shareholders suing BP.  Russia’s retail market is to become the second biggest in Europe.  RUSAL is planning capacity cuts this year on the back of low second-quarter profits.