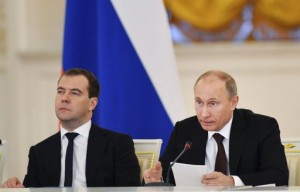 Seven people were detained near the Federation Council yesterday for holding an unsanctioned protest against the Dima Yakovlev Bill, which will ban U.S. citizens from adopting Russian orphans.  Now that the bill has been passed unanimously, all that remains for the bill to become law is a signature from President Vladimir Putin.  Putin, for his part, says he ‘doesn’t see any reasons’ against doing so, and that he ‘intends to sign it’ into law.  Reuters reports on Russia’s overcrowded orphanages (over 650,000 Russian children are considered to be orphans), saying that vulnerable children are being used ‘as a bargaining chip in a bilateral feud’.  The ban is reportedly supported by 56% of Russians, according to a Public Opinion Fund poll.  United Russia official Boris Zherukov was shot dead in his office in the North Caucasus on Tuesday.  Prosecutors are asking the court to find the only remaining suspect in the Sergei Magnitsky case, Dmitry Kratov, who was initially charged with negligence, not guilty.  A lawyer for Magnitsky’s widow commented: ‘We have not determined what happened, and the biggest tragedy here is that… this may have been our last chance to ask questions’.  A top public health official is anticipating ‘ten days of hell’ when Russians take their annual New Year’s holiday this Saturday.

A number of defense suppliers, including Oboronservis and its subsidiaries, failed to deliver $474 million worth of weapons to Russian armed forces this year.  Russia has raised import duty on farm equipment to levels higher than pre-WTO-membership times.  Gazprom’s insistence on clinging to ‘rigid long-term contracts’, thrown into light by a new $17.4 billion deal between Statoil and Germany’s Wintershall which is based on flexible spot-market pricing arrangements, could see the gas giant losing its place as Germany’s main supplier.  Members of the AAR consortium have said that they will follow Vladimir Putin’s call and reinvest the money from the sale of TNK-BP back into Russia.

Yekaterina Samutsevich, the Pussy Riot member who was released from prison, talks to The Guardian about how the trial was stacked against the group.  Minimum vodka prices are to rise by a third next year as part of a bid to curb alcoholism and counterfeit spirits.