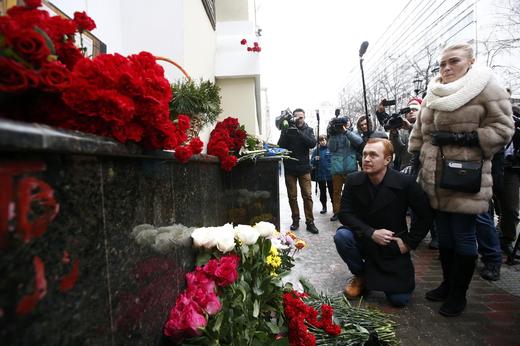 A huge search operation is on in the Black Sea to look for bodies of the passengers of a Russian military plane that crashed on its way to Syria.  All 92 passengers on board were killed, according to the Russian authorities, with President Vladimir Putin declaring yesterday a day of mourning.  Russia says it does not believe that the crash was caused by terror, although the cause is still unknown.  Among the passengers on board was prominent humanitarian and rights activist Elizaveta Glinka, who was known affectionately in Russia as ‘Doctor Liza’. Daria Litvinova praises a few of the movements that emerged out of grassroots activism in Russia this year.  Leonid Bershidsky dubs Vladimir Putin ‘troll of the year’; his approval rating for the year was 64%, according to polls.  The Kremlin is anticipating a 70% victory in the presidential elections in 2018 with a 70% turnout (‘a very high bar – even for Putin’).  As the 2017 budget reflects more major austerity measures, Sergei Guriev argues that the Kremlin has persuaded Russians to accept current economic conditions by promoting the narrative that Russians are tightening their belts for the good of the nation.

State development bank VEB will post a $2.14 billion loss for 2016.  Rosneft says it will be able to have flexibility with its production volumes next year, in spite of the recent OPEC agreement that will cut Russian production overall by 200,000 barrels per day by the end of the first quarter.  A top Rosneft executive has been found dead in Central Moscow in the back seat of a company car; the FSB has launched an investigation and the cause of death is still unknown.  Construction has begun on the first ever China-Russia highway bridge across the Amur River.

During his annual press conference last week, Vladimir Putin said he always knew that Donald Trump was going to win the US presidential election, and dismissed accusations of Russian involvement in the result.  He said he was not interested in an arms race with the U.S., arguing that Russia is ‘stronger than any aggressor’.

PHOTO: People pay tribute to passengers and crew members of Russian military Tu-154 plane crashed into the Black Sea, near a makeshift memorial outside the headquarters of the Alexandrov Ensemble, also known as the Red Army Choir, in Moscow, Russia December 25, 2016. REUTERS/Sergei Karpukhin