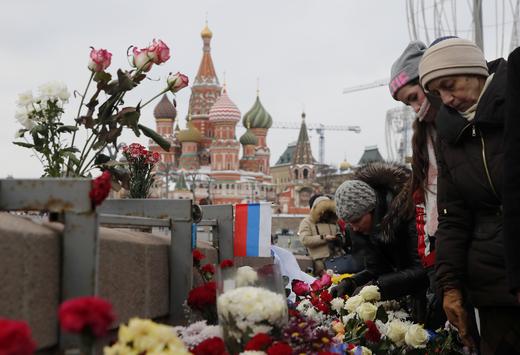 As reports claim that Russia’s new daily five-hour truce has failed to allow medical evacuations in Syria, a poll by state-run VTSiOM found that almost 75% of those surveyed believe the Russian military’s Syria operation has achieved its goals. Presidential candidate Ksenia Sobchak is calling for an investigation into sexual harassment allegations against Leonid Slutsky, the chairman of the State Duma’s International Relations Committee, after allegations against him were made by at least three female journalists. A colleague of Slutsky’s has pledged to reintroduce a bill on gender equality that has been stuck in committee since 2003. President Vladimir Putin has signed a decree that expands the Federal Guard Service’s power, charging it with implementation of “information warfare measures” and countering cyberattacks. The woman at the centre of the recent scandal involving oligarch Oleg Deripaska’s links to the Kremlin, which was brought to public attention by Alexei Navalny, has been jailed in Thailand for running a sex training seminar without a permit. Anastasia Vashukevich, aka Nastya Rybka, an escort who filmed Deripaska on a yacht with Deputy Prime Minister Sergei Prikhodko, is appealing to US journalists and intelligence agencies via her Instagram account, saying she has information about links between Russia and US President Donald Trump.

Estonia’s financial regulator will open an investigation into Danske Bank, following reports that it was aware of money laundering allegations at its Estonian branch, linked to Russians including Putin family members, at least 4 years ago. Danske has lost $1.6 billion in value after the allegations were made public. Russia’s oil output cut with OPEC has beaten market expectations in meeting its commitments, but the US is set to overtake Russia as the world’s biggest oil producer by next year, and possibly sooner. Sberbank has loaned oil pipeline monopoly Transneft $1.8 billion under an out of court settlement relating to the latter’s 2013 losses resulting from the sharp devaluation of the ruble. Sberbank’s loan to Sistema allowed the conglomerate to pay $715 million to Bashneft under a settlement with its parent company Rosneft.

On the third anniversary of his murder, supporters of Boris Nemtsov in Washington DC have formally unveiled a new street plaza dedicated to him. After a peculiar video that seemed to show a policeman spray-painting pro-Putin graffiti on a fence in the Komi Republic was posted online, the entire fence disappeared.

PHOTO: People visit the site of the assassination of Russian opposition leader Boris Nemtsov as they mark the third anniversary of Nemtsov’s death, with the St. Basil’s Cathedral seen in the background, in central Moscow, Feb. 25, 2018. (Reuters/MAXIM SHEMETOV)