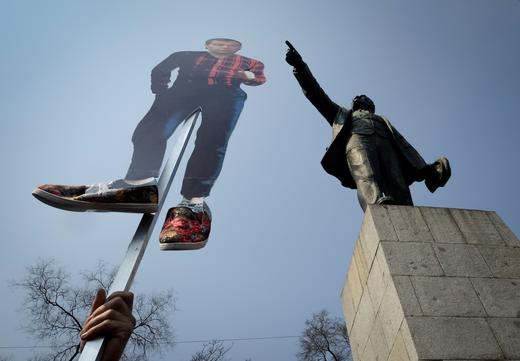 Iranian President Hassan Rouhani met with Prime Minister Dmitry Medvedev yesterday, a congregation likely to irk the US and Saudi Arabia; it seems likely that Iran and Russia will expand energy cooperation during his visit. Following his detention at an anti-corruption demonstration in Moscow on Sunday, which was attended by thousands, opposition leader Alexei Navalny has been fined $300 and sentenced to fifteen days in prison for disobeying police and organising the protests. During his hearing, Navanly suggested that the judge summon Dmitry Medvedev as a witness to “explain why so many people protested” (the Prime Minister is alleged, by Navalny’s foundation, to have a significant property portfolio gained through fraud). While thousands were protesting against the allegations, Medvedev, for his part, was on a skiing holiday. Foreign Minister Sergei Lavrov dismissed Western responses as “double standards”, after France, Germany, the EU and the US condemned the mass detentions. Navalny says most of those detained over the weekend were not given the correct papers that would allow them to challenge the legality of their detentions. Kremlin spokesman Dmitry Peskov says the Kremlin’s official stance on the protests is that the government “respects people’s civil position and their right to express it”, but that it objects to the weekend’s rallies on grounds that they were against the law; he also hinted that “underage minors” were bribed to attend. Peskov also made veiled accusations against Alexei Navalny, referring anonymously to “those who knowingly mislead people […] provoking illegal actions.”

The FT looks at the difference between the weekend’s rallies and those of 2012, noting that there are now a much greater number of younger Russians protesting, and that elite corruption appears to be a galvanising issue. RFE/RL also remarks on the significant increase in teenaged protesters, many of whom have known no other political regime than Putin’s. Leonid Bershidsky recalls the 2012 sacking of Vladislav Surkov from his Kremlin post, and thus the abandonment of the Kremlin’s pro-Puin youth organisations that Surkov had been in charge of.  The FT says the protests indicate “surprisingly deep dissatisfaction” with Putin’s rule, quoting a former Kremlin spin-doctor: “The election’s in a year and the plan they had is no good. It was meant to be a bombastic, triumphalist referendum on how great Putin is. They’ll have to rethink all of this now.” The Moscow Times collected some of the best videos of the protests from around the web. Kremlin state television neglected to mention the protests at all, focusing instead on a story about an escaped cow.

Truck drivers across Russia protested the new “Platon” truck tax yesterday with a nationwide strike.  US President Donald Trump’s son-in-law and aide, Jared Kushner, is to be questioned by a US committee over the extent of his ties to Russia.  Anne O’Donnell remembers the bureaucratic strike of 1917, after the Bolsheviks seized power. Activists are hoping to save Moscow’s iconic Shukhov Tower from collapse.