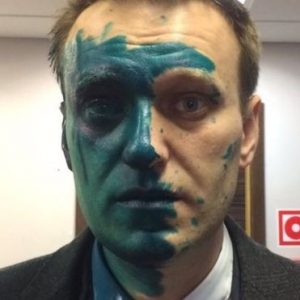 The Kremlin has warned protestors that plans for an opposition rally to be held across the country on Saturday are illegal and anyone who participates will be dealt with accordingly.  Following its blacklisting by the Prosecutor General’s office, the Moscow offices of Open Russia, one of the organisations calling for a protest, have been subject to a raid by by riot police without a court order.  The organisation, founded by former Yukos head Mikhail Khodorkovsky, said police confiscated 100,000 flyers promoting Saturday’s event.  The crackdown on three foreign-registered organisations linked to the former oil tycoon is an attempt to reduce the opposition’s possibilities in the upcoming elections, says RFE/RL.  “Shrek 2″ is what anti-corruption protester Alexei Navalny has labelled himself, after being pelted with green dye for the second time in recent weeks, in an attack which landed him in hospital with a damaged cornea.  The apartment of Communist Party lawmaker Sergei Shargunov has been torched in an apparent arson attack.  A mere 32% of Russians believe that the Kremlin protects basic human rights, a new survey has found.

In a decision which has apparently outraged the Kremlin, the campaign team of French presidential candidate Emmanuel Macron has banned state-funded Sputnik news agency and RT TV channel from its events, on the basis that they promote state propaganda and fake news.  French prosecutors are reportedly looking into alleged irregularities in the decision to award the 2018 World Cup to Russia.  Russia’s former anti-corruption chief Denis Sugrobov has been jailed for 22 years after being found guilty of running an extortion racket.

President Putin has expressed concern that the situation on the Korean peninsula has “seriously deteriorated”, following talks with Japanese Prime Minister Shinzo Abe at which the issue loomed large.  Both men concur that “peaceful, constructive dialogue” is the way forward.  Estonia’s defence minister has said that Russia may use joint large-scale military exercises in Belarus as a way of squirrelling thousands of troops permanently into the neighbouring territory.  The Moscow Times examines the reasons for increasingly fraught relations between President Putin and his Chechen counterpart Ramzan Kadyrov.  Russian people living with HIV will soon for the first time have the option to adopt.

PHOTO: Anti-corruption activist and opposition leader Alexei Navalny, who has had dye thrown on him for the second time this year. (Alexei Navalny)