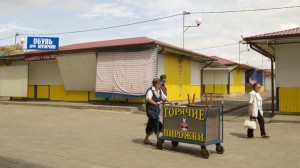 The Kremlin will reduce its original commitments to privatisation, with Prime Minister Dmitry Medvedev announcing that the state would remain in control of giants Rosneft and VTB, apparently due to the current low values of its other assets.  Analysts suggested that selling stakes in these companies, at this point, would create ‘lasting damage’ due to the current state of the markets; and that Russia needs a more vibrant private sector to stimulate growth.  Lukoil denies reports that it has received takeover offers from Rosneft: ‘It would be tough to buy us, practically impossible.’  Gazprom is expecting a loss of 10% of this year’s net profit due to low gas tariffs and at least $800 million in rebates to European clients, and denies allegations that it is blocking natural gas supplies from the E.U. to Ukraine.  Recent energy deals indicate that the Kremlin is ‘finally getting serious about opening up fast-growing Asia Pacific markets’, but what does this mean for its E.U. trade?  Rosneft says it will buy out minority shareholders in TNK-BP to relieve pressure and negative feedback, but Igor Sechin said that the company was not a ‘charity fund’, and would pay less for the shares than they were worth at the time of the takeover.  Two thirds of Russians are skeptical of spending for the 2014 Winter Olympics – ‘the most expensive in history’ – and a fifth believe that games money is ‘simply being stolen’.

Opposition figure Alexei Navalny presented his Moscow mayoral campaign platform yesterday, arguing for decentralised governance.  Alexander Lebedev has been cross-examined in a Moscow court as part of the trial at which he stands accused of ‘hooliganism motivated by political hatred’. His character references included a number of well-known actors, both Russian and American.  Mikhail Khodorkovsky has apparently been ‘promoted’ in jail, from a general laborer to a quality control inspector.  Patriarch Kirill is urging Christian European countries to oppose ‘propaganda of amoral and hedonistic way of life’.  Russia’s military denies reports that its personnel have been withdrawn from a naval base in Syria.  The Financial Times says that Russia is helping to support Syria’s economy with deliveries of oil products.

President Barack Obama says that normal legal channels should suffice in relation to Washington’s request that Edward Snowden be expedited, and that he ‘shouldn’t have to’ make direct contact with Vladimir Putin on the matter.  RIA Novosti has compiled a collage of American advertisements drawing on perceptions and stereotypes of Russia.  The Guardian reviews Ben Judah’s Frail Empire, which investigates Putin’s grip on power.

PHOTO: People walk in front of closed booths at an open-air market in Minsk, June 27, 2013. Thousands of Belarussian merchants stopped business for a day on Thursday during a warning strike against the new trade rules that Belarus would enter under the terms of a customs union with Russia and Kazakhstan, local media reported. REUTERS/Vasily Fedosenko