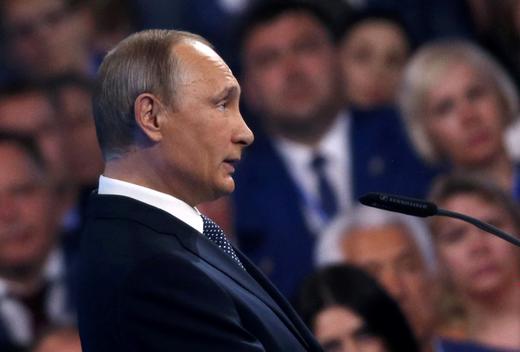 President Vladimir Putin appeared at his first United Russia congress in four years, praising the party for its work in consolidating society over the past 15 years in a bid to drum up support ahead of the September elections.  He also warned political hopefuls to avoid ‘betray[ing] the interests of this country’ by talking about Russia’s current difficulties or making ‘unsubstantiated promises’.  Kremlin spokesman Dmitry Peskov drew comparisons between the fallout from Britain’s Brexit referendum and the collapse of the Soviet Union in 1991.  Turkey is seeking to turn around the state of its foreign diplomacy with Russia by apologising to Vladimir Putin for the downing of a Russian warplane last year.  President Tayyip Erdogan says he believes his move will quickly normalise relations with Russia. ‘Erdogan must feel a certain amount of envy for Putin’s ability to do pretty much whatever he wants in his country — but also a kinship,’ commented Bloomberg.

A new European Union policy document describes Russia as a ‘key strategic challenge’ with regard to Crimea and Ukraine.  American and other Western diplomats are reporting an increase in harassment from Russian intelligence services, prompting high-level complaints.  A court in Orlov is refusing to release Oleg Navalny, the brother of corruption activist and opposition politician Alexei Navalny, on parole.  Activist Valentina Cherevatenko was interrogated by the Investigative Committee for failing to comply with the ‘foreign agents’ law; Human Rights Watch is calling on the authorities to stop harassing her.  Edward Snowden is critical of a newly proposed law in Russia that would, he says, lead to mass surveillance.

Sixty-seven Russian athletes in track and field are applying to the sports Arbitration Court demanding to be allowed to compete at the Rio Olympics this year.  Following her two year suspension from international competition, tennis star Maria Sharapova will go to Harvard Business School.