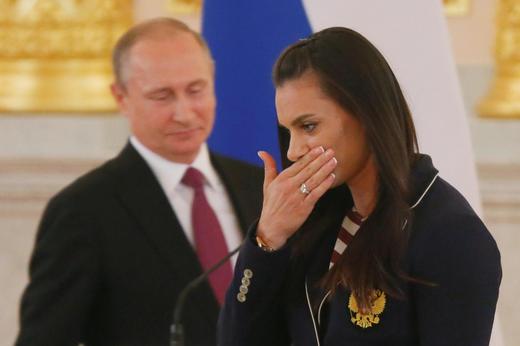 Russia has deployed more air defence systems along its southwestern borders, as well as a contingent of ‘self-sufficient’ troops in Crimea, in response to a buildup of NATO forces. Vladimir Putin – newly voted Russia’s most trusted official, with a long-standing approval rating of over 80% – spoke to roughly 100 members of the Russian Olympic track and field team yesterday at the Kremlin, accusing the International Association of Athletics Federations (IAAF) of discrimination and of there being political motivations behind its banning of the athletics team from competing in Rio this year.  He says the absence of Russian athletes from the Games will devalue the medals won by other Olympians and make their victories ‘tasteless’.  The IAAF is standing behind its ban.  Several small rallies were held (and disbanded) in Moscow and St. Petersburg, with people gathering to protest the new package of anti-terrorism laws, dubbed the ‘Yarovaya Law’, which many say is an affront to freedom of speech and privacy.  Ultraconservative senator Yelena Mizulina has put forward a bill that would decriminalise domestic violence (Mizulina also authored the controversial law against ‘gay propaganda’).

Donald Trump, the US Republican Presidential candidate, made a raft of headlines for ‘actively encouraging’ Russia to hack his opponent’s emails yesterday.  Russia has been denying accusations of involvement in DNC hacks all week; this piece argues that, although it looks increasingly likely that Russia was behind the hack, it may have been the byproduct of ‘fairly routine espionage’ rather than an attempt to manipulate the US election.  Some see Trump and Putin as best buddies; others are waiting for them to go to war.  The allegation that Russia could mount an overnight offensive against Poland is ‘pseudo-analysis from mindless people’, says Kremlin spokesman Dmitry Peskov.  Peskov says there are no concrete plans as yet, but that Russia reserves its right to demand repayment of a $3 billion debt from Ukraine.

Russia’s soaring market this year does not show a true picture of its economy, says a US analyst who believes that Russia is ‘like a poker player with a very weak hand […] they’re going to bluff and they’re going to take risks’.  Despite millions of rubles in cash having been found at his home, suspension from office has been ruled out for Federal Customs Service head Andrei Belyaninov due to conflicts within the Labour Code.  The raid was made in connection with a smuggling case linked with St. Petersburg businessman Dmitry Mikhalchenko, and the FCS legal department says Belyaninov’s current status in the case is merely that of a witness.  Belyaninov says the cash found stored in shoe boxes was his family savings.

PHOTO: Track-and-field athlete Yelena Isinbayeva reacts as she walks past Russian President Vladimir Putin during his personal send-off for members of the Russian Olympic team at the Kremlin in Moscow, Russia, July 27, 2016. REUTERS/Maxim Shemetov