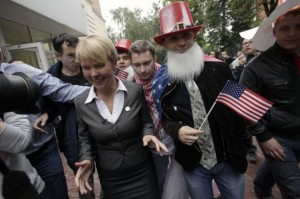 Taisiya Osipova, the wife of Other Russia activist Sergei Fomchenkov, has been jailed for eight years for possession of heroin which she says was planted in her home by police.  Opposition leader and anti-corruption activist Alexei Navalny says investigators are raiding a willow-weaving factory owned by his parents, supposedly to search for evidence linking him to a corruption case. ‘Most probably they will seize shocking criminal baskets and a woven armchair on which I sat, thinking up the plan to embezzle,’ Navalny commented.  Yevgeniya Chirikova’s running for Khimki Mayor will serve as ‘a test of the electability of the opposition’, says this article, as residents fear that the election commission will find a way of edging her out of the running.  ‘Opponents’ to her bid are attempting to portray her ‘as a tool of the United States’, showering her with fake American money and holding a U.S. flag behind her as she spoke to reporters yesterday.  The Other Russia party have nominated a different candidate for the role, which ‘could further complicate efforts by some anti-Kremlin activists to select a consensus opposition candidate.’

Art activists Pussy Riot appealed their conviction yesterday, as the lawyer for the trio says he has little hope that they will succeed.  Yekaterina Samutsevich wrote to The Guardian from prison: ‘The problem for Putin personally now is that a lot of people no longer see his strong hand and authority, but his fear and uncertainty’.  The only United Russia deputy to defend the group is now fighting to keep his post.  Dmitry Gudkov, the A Just Russia Duma representative who faces accusations of illegal commercial activities, has published a blog post about the incomes of United Russia deputies.  Brian Whitmore discusses Judge Yekaterina Veklich’s decision last week to throw out the charges against Garry Kasparov.

The Russian government owes the public $785 billion in Soviet bonds, and Vladimir Putin’s bid to halt payments until 2015 is being thwarted by the European Court of Human Rights.  Eurasia Drilling Co’s ‘unconventional’ drilling technologies have paid off, as the company reported a first-half income comfortably above projections.  E.On says its current gas supply deals with Novatek are worth over $22 billion.

PHOTO: Yevgenia Chirikova, left, being followed Monday in Khimki by pro-Kremlin activists dressed like U.S. symbol Uncle Sam, who oppose her bid for Khimki mayor and are attempting to imply that she is a tool of the U.S. government. (Maxim Shemetov / Reuters)